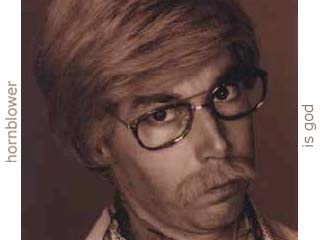 Wow. Jord brought this to my attention and…wow. This is true. Hornblower IS God. I've seen Rory's birth certificate and it says right on there: "Rory God Hornblower." Hooray for Mr. Tony and his webcam at WankerCounty. Right back at you, here's a little story I've got to tell about one little book you might not know so well.

Photographer Ari Marcopoulos' new book of photographs, Pass the Mic: Beastie Boys 1991-1996 is a compilation of candid shots of the band in the studio, on the road, playing basketball, and rehearsing dance steps. Marcopoulos was asked by longtime friend Mike D to document studio sessions for Check Your Head in '91 – a stint that lead to a longer freeform collaboration (with Marcopoulos shooting the live video for "Gratitude," as well as the back cover for Ill Communication and documenting the Tibetan Freedom Concerts) and culminated in Adam Yauch proposing a book. The photos end in '96 because the Beasties "took a break."

I finally got "Piano Man" on record, Seth. HA!

My 19th birthday's coming up and my dad needs verification that I'm a full-time student for insurance purposes. Unfortunately, I'm only enrolled in 11 units and in order to be classified as "full-time," 12 units are required. Out of desperation, I went to check out this class today (with the intention of enrolling) on the advance study of directing principles and production techniques as applied to video magazine production. It's essentially a class where you work on a magazine show for UCLA that will be broadcast on Los Angeles public-access television. The class sounded promising; that is, until I met my potential classmates. Graduate film students. Ugh. Just the fact that they're graduate students studying film is revolting enough. Life's too short to spend half of it in school, but there I was, surrounded by a bunch of late twenty-somethings who actually believe that a few more years of film study is their ticket to the big time. Look, I don't wanna brag or anything, but you give me one day and I can shit out a better movie than any graduate film student will ever produce.

To make a long story short, the end.

Is that too short? Well, I don't think I'm gonna enroll in Film & TV 187A anymore. What I'll probably end up doing is registering for some lame class like African Art, ordering a verification transcript, and then dropping the class. I just can't stand film students, especially graduate ones, and their "too cool for mainstream" mentalities. The TA didn't know who the band Incubus was because she only listens to avant-garde radio. What…the…fuck. Even the teacher, who was clearly in her 50s, knew who Incubus was. Then, there was this fat screenwriting student who totally thought she was hot shit. "Look at my Photoshop flyer! Isn't it cool?" NO. Sufferers of Parkinson's disease make better flyers than you do. I didn't actually say that to her, but I should have. I should have smacked her too. I mean, this chick still thought 60 Minutes is the number one show on television. Uncle. Film students can all go back to hell and take their black-and-white French cinema with them. As for me, I have the entire WWF pay-per-view year (so far) on DVD. Now that's entertainment.

I always seem to buy DVDs that appear as if they've been tampered with. Either the packaging is mangled or the disc has glitches and is missing material. I guess I have the bad DVD touch.

It's the second week of class and I've already tripped three times. Tripped as in fall face-first onto concrete, not dress up as a crazy-funny retard and put E in my mouth.

Monday night, I attended a floor dinner. UCLA Dining Services is being really evil this year and deactivating the meal plans on students' BruinCards whenever they have a floor dinner, basically forcing people to eat with their floormates. What's more, the floor dinners have themes. The theme of my floor dinner was "breakfast for dinner." Seriously. I'm paying $9000 a year so I can be forced to eat breakfast food for dinner. On the menu: breakfast burritos, cheese blintzes, chicken and waffles, scrambled eggs, bacon, tater tots, and milk. There goes a year off my life. Thank you, UCLA Dining Services.

Wait, I'm not done yet. With the increasing number of students living on campus, Dining Services continues to cram people into dining halls, oblivious to a little thing called "supply and demand." As I ate dinner tonight, the chicken loco bowls quickly became chicken loco plates and the roasted pork magically turned into steamed fish.

Moreover, Dining Services was unloading food supplies from a truck one day and I noticed that the bulk meat products had the following warning printed on the packaging: "Grade F Meat. For prisons and dorm cafeterias only." Whoo!

It took me three hours today to read the 20-page general prologue of Chaucer's Canterbury Tales. Every single line of the text is annotated, because without the side and foot notes, Canterbury Tales is no more intelligible than Perry Farrell. At least somebody bothered to translate Beowulf into readable English.

I'm a 21st digital boy. I don't know how to live but I got a lot of toys. As a result, I have to rely on others to tell me about this mysterious "outside world" via AIM. What did I find out tonight?

"Being drunk is really fun."

Really… I did not know that. Did you hear that everybody? Being drunk is really fun.

In addition to the latter mind-blowing aphorism, I was also informed that one of my high school teacher/lesbian nemeses told her class that she wants a poster of Jon Yu so that she can hang it up on the classroom wall and hit it. That's right. Paige Price wants a poster of the great Satan of high school journalism so she can…hit it. I think I just might hand-deliver a poster of me (with a ping pong paddle!) to her classroom one day. Better yet, I'll commission hats through cafepress so she can hit herself! Hey, do you think cafepress makes panties?

I had long ago said my "fuck it"s and moved on, but if Price wants to keep this up, let's play.