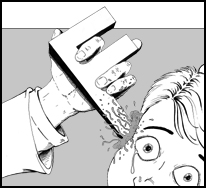 It's funny. Yesterday, I talked about dismemberment and today, I read Sir Gawain and the Green Knight for English class. In case you're popular, Sir Gawain is a poem about a green knight (yes, he's actually green) who visits King Arthur's court on New Year's Day and challenges anybody there to cut off his head. In return, the decapitator must then go to the Green Knight's Green Chapel the following New Year's Day and have his head cut off. God bless fucked-up Middle English literature.

God must be so sick of blessing America. It's like our country bought the exclusive rights to God's blessings. You never see God bless Canada or Mexico. Do you think God makes distinctions about which countries get preferential treatment?

Chris Harris:
"From an artist's perspective, the biggest problem in the Mideast is not the continued radicalism of extremists, or the status of Jerusalem, but the fact that Israel looks like a big, ugly fishhook. Hell, this was a planned country, and I've seen Rorschach tests with better layouts. However, if one 'filled in' that ugly gap – with, oh, let's say, the West Bank – and likewise reattached that missing Gaza Strip, then Israel might look alluring, even sexy. And this nation's shapely neck benefits not at all from the protruding 'Goiter Heights;' let it fall to Syria.

One need not have watched many late-night infomercials to understand the power of self-esteem. When residents – Jews and Palestinians alike – discover that their ugly duckling region has been transformed into Cinderella, the resulting détente will be nothing short of miraculous."

I saw a commercial tonight where some black guys are playing street basketball and to quench their thirst, they down some of that menstrual Mountain Dew. Then, a narrator says, "Discover a sensation as real as the streets. Mountain Dew: Code Red." Please… There is nothing REAL about neon crimson artificially-flavored carbonated water. J. Lo is more real than red Mountain Dew.

The new Movielife song "Walking On Glass" is here.

College campuses always seem to be under construction. My new favorite television show Undeclared should do an episode on school construction because it's really fuckin' annoying. Get this: UCLA is currently turning our intramural field into a giant hole so a parking structure can be built underneath and then covered with grass. To do so, 250 dump trucks – which come along at a rate of one truck every three minutes – rumble through campus every day from 6:00 am to 3:30 pm transporting dirt from the IM field and will continue to bang on for the next three-and-a-half to four months. Whoo!

Survivor: Africa premieres Thursday night and I've decided to play along this time around. For 39 days (or until I die), I will subsist entirely on the Survivor diet. That's right. I'm gonna eat whatever the Survivor contestants eat and nothing more. Hey, it beats dorm food.

I mentioned last week that my roommate has a soundsystem in our bathroom which he operates while gettin' his freak on. Well, here's the latest:

I'm addicted to Spider Solitaire. Why did Microsoft have to add this game to Windows? It's decreased my productivity output tenfold. I suck at Minesweeper (even with a custom 30 x 30 field and only ten mines), but I know I can win at Spider Solitaire. I KNOW it. If only the game wasn't so frustrating. Just when you think you've got it, there are no more available moves and you're forced to deal, usually resulting in a bunch of unwanted face cards that completely mess up your columns. Bill Gates is diabolical.