"Yes, that's the trouble with mothers. First you get to like them, and then they die."

With papers up my ass, I hadn't planned on posting anything worthwhile, but security has been breached, and procrastinate I must. You write some constructive criticism about a website and suddenly they start bitching and moaning like little girls. Well I say, fuck 'em! That's right. Fuck you, Telcococksuckers! Fuck your unoriginal cracker asses all the way to Orange County!

Why am I so pissed? Well, let's take a look at some of what Reverend Warplayer has to say about me in his latest post: "…his site sucks. It's one of the suckiest sucks that ever sucked." How uncouth. This is what a private school education nets you, ladies and gentlemen. Oh, and then there's this genius tidbit: "Who would ever want to read those excessivly looooong posts that hold the intellect of a small chimpanzee, a chimp with a small penis, I might add." First of all, you spelled "excessivly looooong" incorrectly and forgot the question mark, dumbass. Secondly, last time I checked, Telcobox posts aren't exactly Pulitzer Prize material either.

It's so easy, even I can write a Telcobox post:

Hey, faggots! Once me and [insert name of like-minded pasty white friend] get the new server up and running, Telcobox is gonna be cooler than the Fonz and James Dean packin' fudge in the remote part of a walk-in freezer. I've been testin' it out a lot, and I think Telcobox is best viewed with Windows XP. That is, IF you have XP…like me!!! Poo poo pee pee I'm so cool hahahahaha. Word. (P.S. If All Else Fails owns)

You know why schools require that students be tested for TB? 'Cause they don't want kids growing up to be like Slutco, or whatever the fuck his name is.

To end on a lighter note, Telcobox also makes movies, or what they try to pass off as video entertainment. What utter bullshit. Yeah, they're watchable…if you're deaf or blind (preferably both). Honestly though, I have never seen such flagrant Tom Green and Jackass concept-biting. And the sad thing is, people are clamoring for more of these pathetic "movies"! In fact, I just found out tonight that two of the Telcobox guys actually have a feature film coming out soon. A FEATURE FILM! Can you believe this shit? Fuck me. We're all doomed… 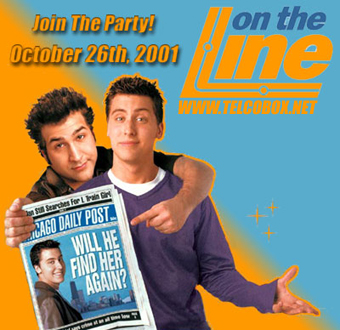