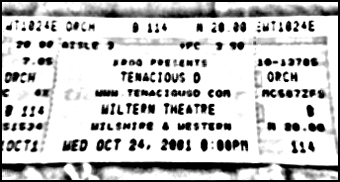 "In the year 2000…a college student will take his first puff of marijuana and realize that 'soy milk' in Spanish means 'I am milk.' He will then laugh…for six solid hours."

Colin IMed me last night: "Give it up, Jon. This Telcobox thing is gettin' old. Your latest post lacks any coherency whatsoever." Then, I saw this on the aforementioned website: "Was his little Seven parody intended to be an insult to me or something? Really, Jon, if you are going to flame me, make sense. Please, it's the least you could do."

Colin, Warplayer, FUCK OFF. I don't see you two updating your sites every day, especially with a massive digital hangover. Let me think…when was the last time I laughed at something on Telcobox? Oh yeah…when they uploaded their new layout. Ernest Hemingway once wrote, "The world is a fine place and worth fighting for." I agree with the second part. I refuse to relent, dammit! What we do in life echoes in eternity. I am NOT a loser. I WILL destroy Telcobox. Watch me. Oh, and if your name is Agent Stickboy, I'd pay very close attention tomorrow.

Donnie Darko: go watch the trailer and see the movie when it's released on Friday. My little Bubble Boy is growing up.

With the holiday season fast approaching, TRL has pulled together a collection of songs for a TRL Christmas record due October 30. The first single and video from the set will be Willa Ford's sexy remake of "Santa Baby (Gimme Gimme Gimme)." First, she wants to be bad. Now, she wants a dumpy old man to eat her out. [sigh]

A year after their fans gave up on them and following reports of their first-ever recorded financial loss, the Spice Girls, once one of the world's hottest all-girl groups, have finally decided to call it quits. Apparently, Mel B and Posh Spice are said to be the instigators of the breakup after saying adios to their manager Nancy Phillips last week. Although no official word has been released, one is expected to come down the wire pretty soon. Whatever happened to girl power? According to reports out of the UK, the only thing said to be preventing an official statement about the split from being released is the fact that none of the girls are on speaking terms with each other. So much for "friendship never ends."

It's funny how all-girl groups started the pop music fire in the mid-90s only to have their success supplanted by all-boy groups. Ladies and gentlemen, our patriarchal society at work. Actually, I just think that guys prefer a monastic relationship when it comes to pop stars. Better to fawn over one chick who wants to be a slave for you than to spread yourself thin goin' Mormon on five hos at the same time. Girls, on the other hand, will get on any guy. That's just common knowledge.

My favorite Spice Girls lyric: "If you wanna be my lover, you gotta get with my friends."

A report appears to have finally confirmed the title of the third and final part of the Matrix trilogy. According to an interview with producer Joel Silver, the title will be The Matrix Revolutions. What…the…fuck. The Matrix Revolutions?! Did L. Ron Hubbard write the script? Is Disneyland building a promotional ride of the same name? I'm confused.