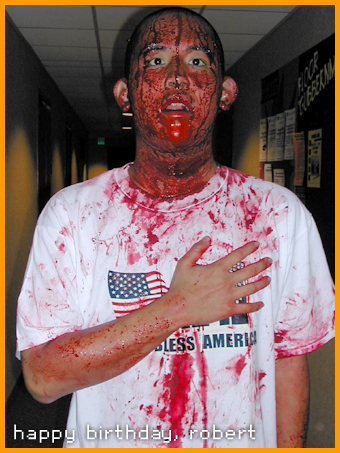 Ladies and gentlemen, you are witnessing history in the making. The images you see here are the first commissioned photographs of me in two years. I may not be wearing a Jigglypuff costume or disguised as a black guy named Joshua, but I tried real hard to get into the spirit of Halloween 2001, and I hope I succeeded. Some pre-show entertainment: 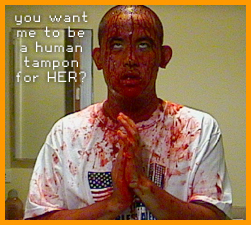 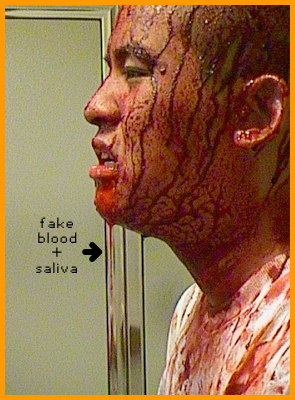 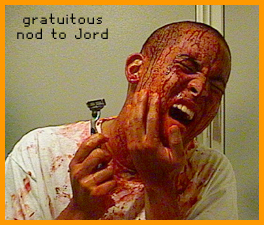 What a Halloweenie Roast. Whoo!

have you seen this guy from the banner ads on websites?
pyxis 042: where did they find a dude who looks like he's somehow white, asian, and black all at once?

Trailers for Star Wars: Episode II – Attack of the Clones will screen before Monsters, Inc., which opens Friday.

Iron Chef, the dubbed Japanese cult hit that mates The Frugal Gourmet with the WWF, is about to undergo a full-scale Americanization. Two Iron Chef USA specials, filmed in July at Las Vegas' MGM Grand hotel, will air on UPN in November. Replacing Chairman Kaga as host will be William Shatner.

"Sisqó" has purportedly become a popular derogatory euphemism for those suspected of being homosexual.

Warner Bros. confirmed Monday that its hugely anticipated Harry Potter and the Sorcerer's Stone, the first film based on J.K. Rowling's wildly popular fantasy franchise, has clocked in at 152 minutes and 13 seconds. Film journalist Marshall Julius, reflecting on the movie that is to be given its world premiere in London on Sunday, said: "It is entirely possible that this will become the biggest grossing film ever."

The main event for WWF Survivor Series on November 18 in Greensboro will be a ten-man elimination match with Shane McMahon, Booker T, Kurt Angle, Rob Van Dam, and Stone Cold Steve Austin vs. Vince McMahon, The Undertaker, Kane, The Rock, and Chris Jericho.

Saves The Day will play a free concert this Saturday at the Universal City Walk as part of "XBox Unleashed," a 48-hour promotional video game marathon.

The latest issue of Spin magazine has a feature on gaming 2001. The following are some memorable moments from the piece:

Crash Bandicoot: Wrath of Cortex
At what point does it stop being harmless, good-natured mascoteering and start being corporate whoring? Approximately now.

The Sims: Hot Date Expansion Pack
In a desperate plea to help agoraphobic desktop jockeys everywhere, Electronic Arts takes its popular sim to the place that no gaming geekster ever dared go: a date. Unadulterated genius.

Frogger: The Great Quest
SYNOPSIS: Take Frogger on a froggy quest and interact with all his froggy friends in what may be the worst idea for a video game ever.
GAME'S BEST FEATURE: That it goes away when you violently unplug the PS2.

Outlaw Golf
Screw Tiger Woods. If there ever was a sport that needed a shot in the pants, it's golf. Simon & Schuster allows you to break car windows and pummel your own caddie. Play as ex-cons, rappers, and pimps. You, too, can be a bad boy for life.

Charts We Would Have Included if We Had More Room
But We Didn't
The XBox controller vs. a brick

Okay, I don't IP block to make polls more interesting, but this is ridiculous.