Chicks Don't Dig Me. Only on Telcobox would this be a revelation.

Writes Scudco: I was thinking mostly about my bad luck with society, mainly girls. I was thinking for a long time about why I find it impossible for me to get girls to even talk to me.

Hmmm. Maybe you should stop hanging out at the local day care center. That might help. Note: he had to think for a LONG TIME.

There's a list I comprised in my head which is probably lacking a few reasons that were developed while I was thinking about this subject, but in no particular order here they are:

Okay, so there's a list you comprised that doesn't include reasons you thought up while comprising the list. Wait… I smell a walking contradiction. Apparently, Scudco is the world's only down-to-earth snob opinionated enough to pass for an impassive mute. Come again?

Buddy, you are sorely mistaken. I don't think something like an elitist attitude hinders one's ability to catch snatch. I mean, chicks dig Stile and Webpig, at least on AIM. No, I think the number one reason women avoid you is because of…your head.

That's right…your head. Look at it: 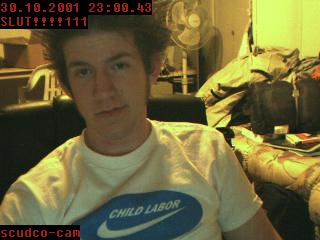 It's as if a plastic surgeon removed Rosie O'Donnell's ass and attached it to Don King's face. Your mind isn't the roadblock to sexual gratification, dude. That prestigious title belongs to your head. By the way, nice shirt. Another classic example of unfortunately typical high school "radical" politics. I guess you can't expect much from a guy who thinks George Orwell is deep.

If you want girls to like you, Scudco, then take my advice and chop off your head.

Break out the guillotine and rid yourself of that bane encasing your brain in order to get ahead in your romantic life. There's no need to stress over social pretenses or small talk when you don't have a head. Hakuna matata! Besides, all women really want is a hard body and something they can stick in their vaginas every once in a while. A tongue is nice to have, but let's face it – a dog can do the same thing that a man can to much greater effect. Decapitation also means a more rapid satiation of your taco-philic appetite. Simply mash one up and jam it down your exposed esophagus. No more of this chewing nonsense. :D

[sigh] I realize that people tire of my constant (and often lame) Telcobox attacks. I've received queries concerning just how I plan to destroy the Telcobox site. To tell you the truth, I dunno. Consider this post the end of "phase I." Warning shots have been fired and now it's time for me to retreat and re-evaluate the battle plan. Mark my words, though, this is far from over. I can hear the groaning as I type. No matter. I already have mysterious supporters harassing the Telcobox staff with violent anti-'box animated gifs. Rock on, fools.

Oh, and more thing. I found the following bit of warplayer wisdom in the Telcobox archives:

Alien Ant Farm – Smooth Criminal
I haven't heard much from these guys, actually to tell you the truth this is the first song I've heard by em. But hot damn is it good! A cover of the Michael Jackson classic.