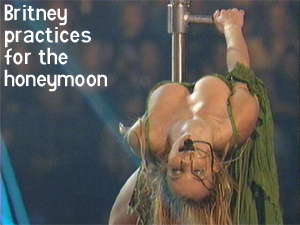 Music news websites are buzzing with reports that the princess of pop, Britney Spears, has already set Valentine's Day, February 14th, as the date for her wedding to *NSYNC's Justin Timberlake. Details of the ceremony are being kept secret. The couple, who have been living together for sometime now, reportedly got engaged in August. Earlier this year, they moved into a $7 million mansion in the Hollywood Hills. The news of Britney's wedding plans come after the pop princess was quoted professing her undying love for Justin earlier this year when she said, "I love Justin and want to spend the rest of my life with him. I want to grow old with him. I couldn't have asked for a kinder and lovelier boyfriend."

After a four-year hiatus, pioneering music festival Lollapalooza will return to the summer concert calendar in 2002. Jane's Addiction frontman and solo artist Perry Farrell is leading the revival with fellow Lollapalooza founders William Morris Agency and his former manager Ted Gardner. Lemme guess…the headliner will be a reunited Jane's Addiction.

Teenagers have for years stood at the vanguard in the dumbing down of America, and this era's crop are no exception. They can't even wear their baseball caps the right way.

And now, yet another global survey has dumped our nation's progeny near the bottom of the educational trough. Children in countries we've never even heard of, like "Denmark" and "New Zealand," are beating us in geography. Undernourished waifs three countries from the nearest web connection are proving more adept in the sciences. And should any young Americans ever acquire the math skills needed to understand the global survey, they would find their math skills sorely lacking.

Why? Theories proliferate, including one that suggests those aforementioned caps squeeze their brains until they literally pop and slip right out of the bottoms of their baggy pants. But perhaps – have a seat, please – perhaps things aren't nearly as bad as they seem. And perhaps, lest things become as bad as they seem, we must consider some radical changes in educational theory. After an illuminating reevaluation of our children's skills, a series of remedial actions are herein proffered, upon which, if we are to check any trend toward density, we must act immediately.

History
The reason today's children know less history than previous generations is painfully evident: There's more of it. As one youth explained, "[older Americans] didn't have to learn about things like that World War and colonies and the Emaciation [sic] Procla-thing and all that because they lived through it." To keep the workload fair, a cut-off mark should be chosen – perhaps 1698 – which moves with the current year and before which no history is taught. After all, history repeats itself anyway – there's no point in being redundant.

English
The reputation of young people's vocabulary has been unfairly tarnished by an ageist, myopic definition of what constitutes slang. In years past, long, difficult words such as "extenuate" and "pugnacious" were the "hip lingo" of the times; these words now sound hopelessly dated, or "out." Today, really really short words (such as "cool" and "rad") are the speech pattern of choice. We can't reasonably expect them to use "lugubrious" or "obfuscate" any more than they do "groovy."

The size of youth's vocabulary has also been criticized, proving that any statistic can fall victim to a negative spin. The plain fact is that kids today do not have a smaller vocabulary, they have a more efficient vocabulary. Over 240 words, for example, ranging from "stylish" to "titillating," can now be expressed with the omni-word "phat."

Besides, English and its grammatical components will be rendered obsolete by the year 2010 anyway, at which point all communication will have been distilled into AIM abbreviations. A typical conversation:

Mathematics
The great irony of society is that the more and more powerful machines we create to do math for us, the more and more some people insist that math is essential for us to learn. Bull-SHIT!!! We have calculators, computers, ATMs, and CPAs: Math has never been less important to learn in the entire history of civilization. Kudos to the younger generation for recognizing this.

Moving Forward
And yet, one is still left with the nagging feeling that today's youth are a bunch of meandering dullwits. Again, we must act immediately to confront the greater problems of our current educational system; at least three additional improvements warrant our prompt consideration:

To illustrate one flaw, let us employ a simple analogy. Think of teenagers as a diverse infestation of roaches in a home, and education a highly toxic poison. Our current high schools, then, are a scattering of storebought traps: Occasionally a roach wanders in and picks up some chemical toxins, but many do not eat enough, and some stay away entirely. Much more effective would be the hiring of an exterminator, who cleverly takes the poison to the roaches. It follows that we should not simply wait for students to accidentally stumble into schools, but instead douse them with education wherever they already are. In newly designed mall schools, for example, learning will be subversively incorporated into the everyday activities of "hanging out" – math at the cash registers, social studies in the food court, and foreign languages at Au Bon Pain.

Second, we must emphasize the positive, somehow take better advantage of the areas in which this generation excels, for it does excel at many things:

…Or, as an alternative, we can decide to not take advantage of those areas.

Third, and with only the slightest air of defeat, we must remember that youth have always been – well – kind of dumb. Romeo and Juliet thought that love was the greatest emotion. Ha! A young Michael Jackson sang that "people make the world go 'round." Ha! Ha! And in the sixties, students actually believed that life would be better without the massive economic might of the military-industrial machine. Ha ha! Ha! Time, we may note with relief, corrects this type of blatant naiveté on its own, crushing and conforming these puerile ideas of youth into our known and established – and right – societal standards.

With this in mind, then, perhaps our best course of action in addressing the stupidity of the young is not to act immediately at all, but instead to lean back and do nothing. Don't help them, don't encourage them, and please don't give them any hints. Eventually the real world will force smartness upon our children, just in time for them to grab hold the reins of the world and kick their elders screaming off the carriage.

Fourth, and failing all else, we can always just turn off the television.