"We may lose the battle, but we'll win the war." – Alec Baldwin on Pearl Harbor

Did you know that you cannot buy rye bread in Phoenix?

Did you know that the five letter-number combination printed on the plane on the cover of the Beastie Boys' Licensed to Ill record says "eat me" when read in a mirror?

Did you know that you should get your tickets now for The Lord of the Rings: The Fellowship of the Ring if you want to see it opening day? 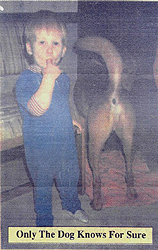 God, it's easy to laugh at Vanilla Ice.

I mean, come on. He's Vanilla Ice, for chrissakes. The hair? The pants? That wretched song he stole outright from Queen? You remember: Kid came from the mean streets of Miami – or at least that was his story, until someone actually checked and found out he was Rob Van Winkle, of the Dallas Van Winkles. No, really. It's too easy – way too easy – to laugh at this guy.

Yeah, well, it just got even easier. Yep: The Great White Dope is back.

Calling himself V-Ice and collaborating, amazingly, with rap luminaries Chuck D and the Wu-Tang Clan's LA the Darkman (as well as not-so-luminaries Insane Clown Posse), Van Winkle released Bi-Polar in October. He calls the album "a double-CD released on one disc" (that sound you hear is Spinal Tap kicking themselves), and he urges fans to listen with an open mind: "Listen to the music," he says. "If you like the song, like the song, man. I guarantee you if you just lend me an ear and check out the new music, you'll dig the music."

Well, no, that's not true either. Bi-Polar is, in fact, every bit as bad as you'd expect. Skabz, the "first disc," features eight tracks of artless rap-metal sung in a clichéd Cookie Monster growl and highlighted (barely) by guitarwork from Josh Brainard, late of Slipknot. "Bloody master psycho creature / Beware of the freak of nature," goes a sample lyric from "Mudd Munster," a nightmare narrative about some kind of yeti who trolls the killing fields "outside of New Orleans" (no, really). "Screams of pain coming from the mud / Streams of rain to cover up the blood / Half-human, half-gorilla / Saskatchewan, cannibal killer."

Not that things get any better on Tha System, the album's 16-track "second disc" (did I mention that it's all on one disc?). Making like Marvin Gaye on "Hot Sex," Ice raps, "Me and you baby, doin' the sex / All night, make it so hot, so nice / I like just the way you make me feel alright tonite / Time for the candle wax and Ice, on the fly carpet ride of life." Oh baby.

Honestly, by any critical standard, Bi-Polar is a train wreck. And Vanilla Ice couldn't care less. "It's just about doing what I want to do," he says. "I just want to keep people interested and cater to the ones who appreciate what I'm doing. And the other ones who don't appreciate, who are player hatin'? Fuck 'em. I don't care if they buy my record or not. I'm not trying to win somebody over who's player-hatin' on a stupid image, or a name. I purposely didn't change my name, because I faced my adversities. I'm not running from anything, I'm not trying to hide anything."

"Fuck no, that's not a name change! Vanilla Ice, that's who I am. You know, you think of people who change their name, like Prince? Everybody knows that's fucking Prince. How'm I gonna hide? I ain't trying to hide."

Besides, he says, he has good reason to hang on to his identity. After all, he argues, Vanilla Ice changed the history of hip-hop.

"Dude, just open your eyes," he says. "Nobody before me sold that many records in hip-hop. I put hip-hop in front of people's ears who never considered listening to it. And now, you go to a DMX concert, or a Redman concert, and there's 85 percent white kids there, man. And the [hip-hop] record sales are all out in suburban areas. So I don't need to say it – it's kind of obvious – but people just overlook it. They don't want to give me credit for anything."

Van Winkle laughs. But for once, you'd have to agree that he has a point. Yes, To the Extreme sucked. To the extreme. But somehow (national insanity?), it sucked to the tune of more than 7 million copies in four months. Sure, you never owned it. But someone you know did, probably a few people, and this at a time when hip-hop just didn't sell like that.

Vanilla Ice's success led to inevitable comparisons with Elvis Presley, another white guy who made it big singing what had been predominantly black music. Of course, Vanilla Ice is no Elvis, so the comparison doesn't really hold up. But let's compromise. Maybe he wasn't the Elvis of rap. Maybe he was the Bill Haley of rap. Either way, he helped open up the world of hip-hop to a whole new audience. There's something to be said for that.

And anyway, Rob Van Winkle says he doesn't worry about his place in hip-hop history. After all, he made his fortune a decade ago (and actually held on to it, making him a rarity). He doesn't need your recognition any more than you need his.

"I'm gonna live my life regardless," he says. "Ain't nothing you can do to me. Hate on me? I've been hated on. You think it affects me? If it did, I wouldn't be doing this, you know? I don't have to do any of this shit. I don't have to go out and face my critics, I don't have to do shit. I could sit home, and build my homes, and mow my lawn."

So yeah, go ahead, laugh at Vanilla Ice. That shit is easy. But give him credit – at least the guy knows enough to laugh back. [obligatory aegis to Dan Reines]