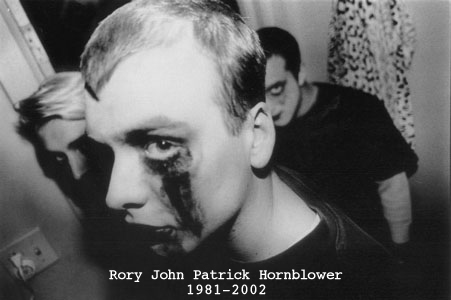 Anthony: Anthony Michael Hall here. [sigh] Where do I start? Jon's still in Mesa police custody. He had calmed down and we were all ready to post bail when the cops had him committed over some online personality disorder test of his that they found.

Anthony: Yeeeah. Doesn't make him look any less crazy. Our lawyers are working 'round the clock to clear up this PR fiasco. We're hoping to get Jon back as early as next week. I talked to him today and he said to tell everyone that "I'm-a rape Jord in a foxtrot uniform Charlie kilo." You hear that, Jord? He's gonna rape you in a something something something! As for Hornblower… [pause] Hornblower died last night from complications of surgery. Our thoughts and prayers go out to his family in…"that state". Still no word on who was driving the van that brought about his demise, but whoever it was better lock and load because we're gonna fuck you up real bad, bitch! In memoriam of the one and only Rory Hornblower, join me now in singing "I Miss My Homies" by Master P.

Sittin' at the ghetto thinkin' 'bout
All my homies passed away (uuunnnggghhh!)
Candy-painted cadillacs and triple gold
That's how me and my boys rolled
How could it be?
Somebody took my boy from me
My best friend's gone
I really miss my homies
Even though they gone away
I know you in a better place
And I hope to see ya soon someday

Who was driving the van? Is Jon really crazy? What does he have against the state of New Jersey? And what's gonna happen to Jord?