When I told people I was going to Detroit for a weekend, I received one of three responses:
1. WTF?
2. Don't get shot.
3. It's really cold there! Bring a jacket!

My mother seems to think that the sun doesn't exist. Every time I tell her that I'm traveling someplace, she always tells me "It's really cold there! Bring a jacket!" even if I'm going to, like, Phoenix. I've been all over the country this year (on my parents' money) for ridiculously short periods of time visiting people I met online and all my parents seem to care about is whether or not I bring a jacket with me.

Apparently, people in the motor suburbs like to rake fallen leaves into giant piles that line the curbs outside their houses, making it incredibly difficult to find parking. Don't you think convenient parking spaces should take precedence over good looking front yards? I mean, it's almost December in the northeast. Why bother cleaning up the mess on your lawn? Sooner or later, snow's gonna come and cover it all anyway!

If you've ever driven on a freeway during a rainstorm, don't the raindrops on your car windows look like a bunch of sperm swimming around?

I was convinced that there was no good way to sleep on an airplane in coach until I saw this in a SkyMall catalogue: 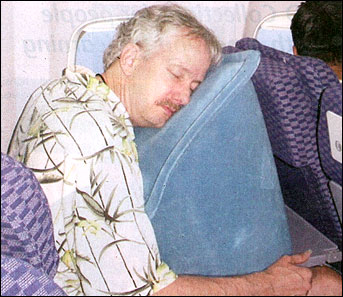 Can you imagine sitting next to somebody with one of these things, especially if he or she is in the middle?

It's like resting your head on a giant titty.

On the plane flight back to Los Angeles, I sat in a window seat next to an old black lady and her grandson. The grandson, who looked to be about 12, was an angry little fellow whose entire vocabulary consisted of a few imperative statements.

I now have a sense of what Mike Tyson was probably like as a child.

So…um…Tony Fader (my hero) gave me his stuffed panda bear.

WHAT? He…he GAVE YOU the BEAR?

But…you didn't go to Michigan this time around!

I can't believe you've been back here three days and never told me about the bear! You know how much I love it!

Well, Tony DID give the bear to ME to hold in MY arms…to love and to cherish…in sickness and in

ENOUGH! Some friend you are…

Up to Berkeley to get a couch from the other Anthony!