Synopsis
Puck (Gummersall), a clever college dropout, joins a radical commune out of sheer boredom. Sit-ins, protests, and a lot of sex and drugs ensue, until Puck finds himself in a tug-of-war between a charismatic mini-Führer (Bruno) and a beautiful Young Republican (Towne) with a fetish for leather and George W. Bush.

What sold us: People are comparing it to Fight Club

Synopsis
A major drug deal is about to go down in Hong Kong, and the good guys and bad guys both face the problem of digging out the mole in their forces. Yan (Chiu-Wai) is a gang member who's really a cop — no one knows his identity except police superintendent Wong (Wong) — and he's going nuts from too many years spent undercover. His counterpart Ming (Lau), also on the force, is actually working for drug boss Sam (Tsang). Yan and Ming race against the clock to uncover one another. 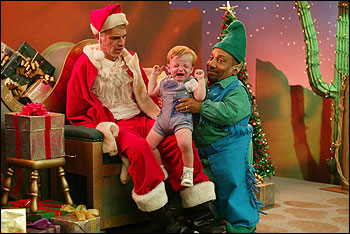 Synopsis
The story of two conmen (Thornton, Cox) who go on a road trip to malls dressed as Santa and his elf. Rather than spreading good cheer, the duo's motive is to rob each establishment, a strategy that becomes complicated when they encounter an eight-year-old who teaches them the true meaning of Christmas.

What sold us: Elf won't be rated R

Synopsis
Okwe (Ejiofor) is a Nigerian immigrant in England who barely ekes out a living working days as a cab driver and nights as a porter at a rather shady hotel when not dodging the British equivalent of the INS.

Whatever little sleep Okwe requires is spent on the couch in a flat belonging to Senay (Tautou), an independent young Turkish woman seeking asylum in England while working under the table as a housekeeper in the same hotel.

One day while dispatched to attend to the overflowing toilet of a room occupied by a hooker (Okonedo), Okwe makes a disturbing discovery: The blockage in question turns out to be a fully intact human heart.

And it turns out a desperate Senay is among those seriously considering a kidney donation.

What sold us: How many black comedies about illegal immigration do you know of? 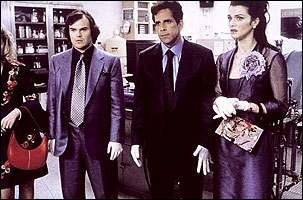 Synopsis
Tim (Stiller) and Nick (Black) are best friends, neighbors and co-workers, whose equal footing is suddenly tripped up when one of Nick's harebrained get-rich-quick schemes actually succeeds — Vapoorizer, a spray that makes dog poop, or any kind of poop, evaporate into thin air. Tim, who had scoffed at Nick's idea and passed on an opportunity to get in on the deal, can only watch as Nick's fortune and his own envy grow to outrageous proportions. The flames of jealousy are fanned by an oddball drifter (Walken) who takes it upon himself to help fix Tim's situation, but only causes his life (and Nick's) to careen more wildly out of control.

What sold us: The incredible cast and crew, especially our lover Ben Stiller and Larry David, who, of course, created Seinfeld and Curb Your Enthusiasm

Synopsis
Joel (Carrey) is stunned to discover that his girlfriend Clementine (Winslet) has had her memories of their tumultuous relationship erased. Out of desperation, he contracts the inventor of the process, Dr. Howard Mierzwaik (Wilkinson), to have Clementine removed from his own memory. But as Joel's memories progressively disappear, he begins to rediscover their earlier passion. From deep within the recesses of his brain, Joel attempts to escape the procedure. As Dr. Mierzwiak and his crew (Dunst, Ruffalo, Wood) chase him through the maze of his memories, it's clear that Joel just can't get her out of his head.

What sold us: The incredible cast and crew Most of the movie takes place in his head 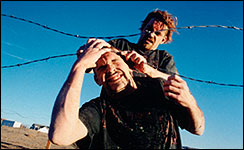 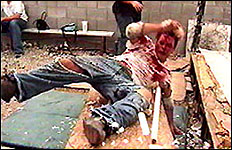 Synopsis
An acclaimed documentary that explores the controversial phenomenon of backyard wrestling, where lightbulbs, fire, barbed wire, mouse traps, staple guns, thumbtacks, and glass are the weapons of choice. Follow several backyard wrestlers as they pursue their dreams of going pro. 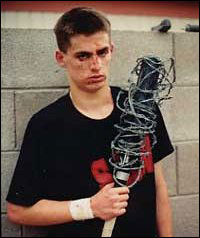 What sold us: "NO ONE UNDER 18 WILL BE ALLOWED IN WITHOUT PARENT AND/OR GUARDIAN DUE TO WRESTLING VIOLENCE" 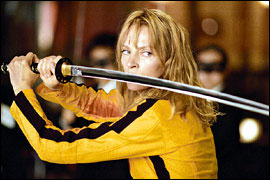 Synopsis
An assassin (Thurman), shot and left for dead at her wedding by her former employer (Carradine) and his associates, wakes from a coma and seeks revenge.

What sold us: A single scene required 100 gallons of blood and was so elaborate that it took nearly as long to shoot as all of Pulp Fiction 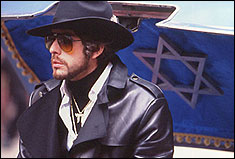 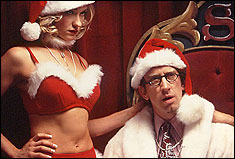 Synopsis
What Jewish kid hasn't fantasized that Rambo, Wonder Woman, or the Sundance Kid were yids who could swoop down and make the world safe from teasing gentile classmates? Finally, as if summoned from the imaginations of misfits everywhere, comes Mordechai Jefferson Carver (Goldberg), a.k.a. the Hebrew Hammer — a badass motherfucker with chutzpah enough to kick ass for the Tribe. Sporting pais (earlocks) and black leather, he's a Manishewitz-slugging Semitic Superfly, a titan of tolerance, who, as a Jew-boy at Catholic school, endured his share of scorn…especially when it came to Hanukkah.

So when Santa's evil son Damien (Dick) topples jolly Saint Nick and threatens to wipe out Hanukkah altogether, who you gonna call? The baaaddest Heeb around! As Damien demonically pushes the Christmas spirit on Hassidic children (using none other than highly addictive It's a Wonderful Life videos), the Hammer has no choice but to mount a serious offensive. Enlisting Esther (Greer) from the "Jewish Justice League" and Mohammed (Van Peebles), chief of the "Kwanzaa Liberation Front," he ventures to the Holy Land, the North Pole, and even to his mother's Sabbath dinner table, all in hot pursuit of the red-suited rogue. 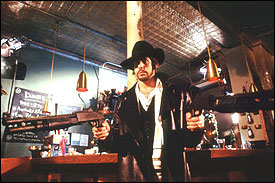