The latest issue of Rolling Stone has an article on UC Santa Cruz, "the most stoned campus on earth." While I'd expect it to be Humboldt State or a Wellesley satellite location in Tehran, I can vouch for UCSC. Alex says he once smoked twelve times in one day (April 20, unsurprisingly) and refers to straight-edge buddy and schoolmate Dan as "a stoner who doesn't smoke." He's currently writing a review of Harold and Kumar Go to White Castle for the back-to-school issue of the…um… Daily Banana Slug?

From the "what in the blue hell?" file: Has anyone seen that television commercial in which Jamaican elephants play reggae music and eat Skippy peanut butter?

Free iPod!
Just follow these two easy steps:
1. collect $60 from five of your friends
2. quit the jewness and fuckin' buy one

The Ten Commandments: The Musical is set to open at the Kodak Theatre in Hollywood in September.

Who did producers cast to play Moses in this musical?

The latest issue of Spin has an article on bands who cover music from Nintendo video games. Someone needs to cover the music in the Indiana Jones level of Tiny Toon Adventures: Buster Busts Loose for the Super Nintendo. What an underrated composition. I still hum it to this day.

Marc Cooper in the L.A. Weekly:
—Do Karl Rove and his Kronies believe we are chimpanzees? Do they believe they can conjure from whole cloth an entire counternarrative of Kerry's life? That we will overlook the consequences of the current war in Iraq — which has cost a thousand American dead, 6,500 wounded and $200 billion — because Kerry's wounds in a different war 35 years ago were not deep enough to satisfy an orange-haired, Viagra-pumped Bob Dole? (Dole, by the way, admits that some of the shrapnel he carries might have been blowback from one of his own tossed grenades).

That said, […] Kerry voted for this folly of a war, and when offered the chance to second-guess that decision two weeks ago, he doggedly stood by his original poor choice. So if I were Bush and I saw that Kerry had robbed himself of the chance to attack me on Iraq, I too would have gone after him on his Vietnam record. Why not?

And what did Kerry think the Republicans were going to do after he staked his entire campaign on his projected "strength" as a Vietnam vet? […] When Kerry strutted around like Rambo, he forfeited the basic principle of making elections about the future instead of the past, and instead of talking about what kind of change he might represent, here we are once again mired in the Big Muddy of Vietnam.

I'm sitting this next election out. Bush and Kerry both make me Ralph, and Ralph is the Nader of modern politics. I hope Giuliani runs in 2008. 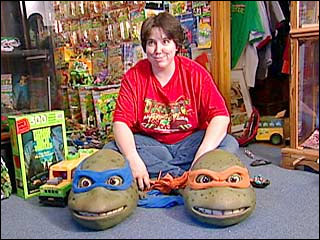