I saw a half-page advert in the L.A. Weekly for this album: 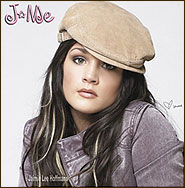 Everyone, J. Yu would like you to meet J-Me!

Her full name is Jaimie Lee Hoffman, but she goes by J-Me. It's like J. Lo, only it's merely a phonetic reduction of her first name and she uses a star instead of a period because shit like that's cute.

Apparently, I'm missing out on a thriving jailbait pop scene.

Basic economics dictate that supply meets demand. Someone must be buying these albums for them all to exist. I assume they're young girls.

When I was growing up, I would see television commercials for baby dolls that ate and peed and I couldn't picture any of my female classmates actually playing with them.

By the same token, I can't picture any young girl rockin' out to J-Me's latest single.

Young girls can't possibly be this taste deficient, can they?

Instead of cracking down on obscenity, I think the FCC should focus its efforts on shutting down Disney Channel and Radio Disney. Regardless of the nature of musical discretion in female youth, the perpetuation of bargain bin pop is more detrimental to our culture than someone saying "fuck" on air.