It's time for the belated news round-up!

This is how you write "Obama" (as in Illinois state senator Barack Obama) in Chinese:

And this is how you write "Alan Keyes" in Chinese:

Two people got that joke. 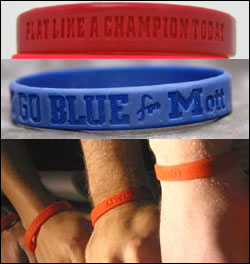 Sports Illustrated on Campus reports that Illinois, Michigan, Minnesota, Oklahoma, South Carolina and Virginia Tech are just a few of the schools that have knockoff "LiveStrong" wristbands.

Soon, enough different-colored wristbands will exist that college students can play their own version of the jelly bracelet game "Snap". 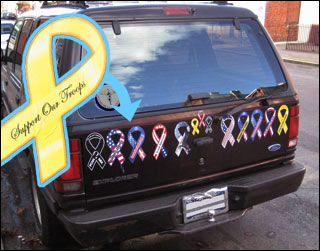 Colleges might as well sell knockoff magnetic ribbons too.

Here's my design for a Michigan ribbon:

Get it? "Blue" sounds like "troops" and it's also what Michigan students refer to Wolverine athletes as! How clever am I?

I don't know what Illinois' mascot is.

The Steamers? (No, that's Cleveland…) The Steamboats? Steam… I believe it's "steam" something… Steacon Steamons?

Screw it. I'm going to call them the Never-Nudes. It's definitely not that, but "The Illinois Never-Nudes" is rather catchy, don't you think?

Stupid Big Ten. Can't even count the number of schools in the conference properly.

UCLA has a new logo.

Keith Bright Strategic Design created the new logo at a cost of $98,000.

"UCLA could have paid me $50 and I could have typed out 'UCLA' in Helvetica font, italicized it and it would've been a done deal. Here, I'll try it: UCLA.

That looks pretty good, doesn't it?"

I learned that my boss used to work at a record store in St. Louis with Jeff Tweedy of Wilco and that the Wilco book quotes some of their former co-workers.

Apparently, all you need to do to score airplay on VH1 is be shot to death at point blank range.