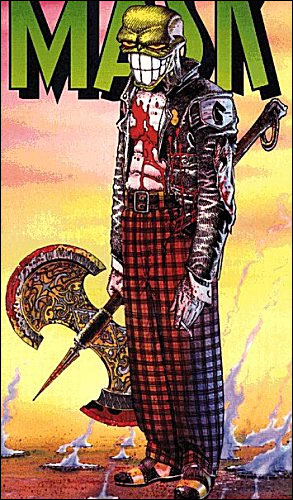 The Mask is a mystic artifact that transforms its wearer into a psychotic living cartoon. Created in Africa, it's stolen and brought to the United States for sale.

The first wearer of the Mask in modern times is neurotic Stanley Ipkiss (played by Jim Carrey in the movie), who finds it in an antiques shop and buys it as a present for his girlfriend Kathy. Able to sense evil in a person's heart, the Mask calls out to Stanley, prompting him to try it on.

After going on a murderous rampage where he exacts vengeance on everyone who's ever upset him, Stanley manages to remove the Mask. However, it swiftly takes control of Kathy, who shoots and kills him.

Kathy manages to remove the Mask and gives it to Lt. Kellaway (played by Peter Riegert in the movie) for safekeeping. In spite of Kathy's warnings, he tries it on as a joke and becomes an insane vigilante, taking on mobster menace Walter, among others.

After nearly killing a friend, Kellaway manages to remove the Mask and buries it in his basement. Mobsters he previously attacked, however, track him down and wound him as he tries to chip the Mask free from cement flooring.

The Mask then assumes control of a geeky mob driver, who quickly seizes control of the local underworld. Kathy tracks him down and tricks him into removing the Mask, at which point she kills him.

Released from prison, Walter fights Kathy/Mask in a battle that results in the loss of the artifact.

The Mask is inevitably discovered again, this time by four high school students who share it amongst themselves. It subsequently falls into the possession of an embittered comic book artist whose wife was killed by the mob before falling through a dimensional vortex into Comic's Greatest World. The next wearer uses it to hunt down his missing sister in New Orleans and it later ends up in the hands of Batman's nemesis The Joker. The last two Mask recipients are an unnamed pickpocket (who wears a yellow suit akin to Carrey's costume in the movie) and DC Comics anti-hero Lobo. Lobo, while wearing the Mask, slaughters a few galaxies. 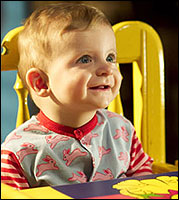 This is the best idea that New Line could come up with for a sequel to The Mask? A fuckin' baby? A hideous little successful fetus?

Of all the potential replacements for Jim Carrey's character, New Line chose the star of Malibu's Most Wanted and a fake baby and dog (evidently animated by the same team behind cinema Scooby-Doo).

Son of the Mask is rated PG, suggesting that the target audience is under 13. When New Line released The Mask in 1994, this target audience was at most two years old. Most of them probably haven't seen the PG-13 original and are inclined to be more open to and forgiving toward the "sequel."

I understand that children are easy to please (see: homosexual sponge), but I hope they're at least sensible enough to ignore this obvious stinker. Kids, save your parents' money and pleasure each other orally instead. I guarantee you'll have more fun.

Why doesn't Congress crack down on crummy children's flicks? They're indecent to me…

Films should have franchise expiration dates. Either rush out sequels or don't make sequels at all.

New Line tried to repeat the success of another 1994 Jim Carrey vehicle last year (Dumb and Dumberer) and it bombed.

The only sequel to a Jim Carrey film from 1994 to succeed was Ace Ventura 2 because Warner Bros. rushed it out a year after the original. Producers easily managed to convince a pre-thespian Carrey to return and the character was still relatively fresh in people's minds.