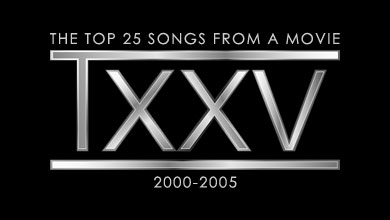 020: Jack Black
"Night of the Griffin"
[Run, Ronnie, Run; 2002]
About halfway through, Run, Ronnie, Run breaks out of narrative completely, randomly cutting to a fictional journey through cinematic censorship involving a delightfully obscene spoof of the chimney-sweep scene in Mary Poppins. Even the comedy's detractors agree that Jables shines as a Victorian singing about kicking women in the cunt [sic] alongside an animated squirrel and choreographed dancers.

019: Zwan
"Number of the Beast"
[Spun; 2003]
Director Jonas Åkerlund passed the Spun script onto friend and former Smashing Pumpkins frontman Billy Corgan to see what he thought. Corgan read it and said he'd do the music in return for a cameo in the film. While Corgan indeed appears briefly as a doctor, the highlight of the soundtrack — a mellon collie acoustic twist on a campy Iron Maiden song — features nary a trace of him. Credit goes to Zwan bandmate Matt Sweeney instead.

018: Pearl Jam
"Man of the Hour"
[Big Fish; 2003]
Director (and Pearl Jam fan) Tim Burton asked the group to contribute an original song to his surreal tearjerker. A screening of the film so affected the band that they wrote this track that same night. Accented by wistful slide guitar work, "Man of the Hour" is a heartfelt ballad that punctuates the film's poignant final scenes.

017: Britney Spears feat. Pharrell Williams of N.E.R.D.
"Boys (Co-Ed Remix)"
[Austin Powers in Goldmember; 2002]
In the beginning Max Martin created Britney Spears. Now she was formless and empty, and the Spirit of Disney was hovering over her records. And Britney said, "Let me alienate prudes," and there was her self-titled album. Britney saw that "I'm a Slave 4 U" was good, and she separated the dark from the lightness. She called the third single "Boys," and then she called Pharrell. And there was a sleazy pop tease — the remix. Jon heard what they had made, and it was very good.

016: Mos Def and Massive Attack
"I Against I"
[Blade II; 2002]
Among the many offbeat electronic/hip-hop pairings commissioned for the sequel to Blade, only Massive Attack and Mos Def emerged with credibility intact. Their collaboration, a dark remake of a Bad Brains song, cuts through your ears with pounding beats and a ferocious boom bap. Mos matches the moody, resounding bass with emotionally taut vocals.