Pope Benedict XVI's strong defense of Catholic orthodoxy earned him a variety of sobriquets including: "The Enforcer," "The Panzer Cardinal" and "God's Rottweiler." 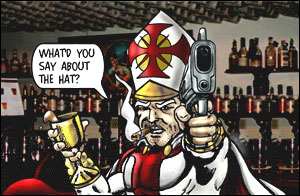 Ar ar ar! I'm taking over the Vatican, motherfuckers! This here is now "The God Pound" and we're gonna be like 1.1 billion Fonzies.

I think the cardinals chose an old Pope because they liked all the media attention that a papal death brought. Benedict is Catholicism's Joe Millionaire 2.