On flyers posted around UCLA:

G4 — videogame television is producing a new series called "Training Camp" where we will pair an accomplished gamer with a novice and tag along for the ensuing instructional process. We are currently looking for gamers/sports fans who have advanced skills with current wrestling and baseball titles.

Dammit. I'm an advanced wrestling and baseball watcher… Why can't they be looking for experts at Bubble Bobble? 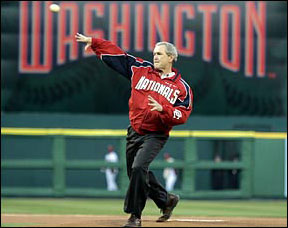 Bush may be from Texas but he learned to throw on Fire Island.

And I thought "put the lime in the Coke, you nut" was a questionable song parody…

Residuals from I Love The 80s must not be cutting it anymore for Young MC.

Another example of suspect creative decision-making:

In a commercial for the male enhancement pill Enzyte, five overweight men with devil horns attached to their foreheads tailgate shirtless. Letters painted on their chests spell out "LIMPS."

California is the only state to command seven Warped Tour dates, four in southern California alone.

This year, The Offspring will play the tour for the first time.

In addition, Billy Idol will hop aboard for seven dates, including Pomona and Sacramento.

Warped Tour is like rehab for mainstream "punk" acts. I remember in 2000, a slumping Green Day and an irrelevant Weezer played the Warped Tour date in San Francisco. Can you imagine them playing 30-minute sets in parking lots nowadays?

Once a rising band, Midtown will play the Smart Punk (sixth) stage at Warped Tour all summer.

I suppose it could be worse. They could have gone the way of The Juliana (and for that matter, Apex) Theory.

Who the hell else would spend half an hour debating if a Light Saber can cut through adamantium?