Right now, video game enthusiasts are filming and networking at E3, opening day for Revenge of the Sith is approaching, and people that I know may be involved in both. I'm Federal Asian Jon Yu, and this is the longest week of my life.

Jon: What the hell is Robert doing here? You know Pete wants me gone!
Jon: I'll…deal with the situation.

[Jon extracts steel briefcase from underneath desk]
Matt: What are you gonna do while we're out?
Jon: Whatever's necessary.

The following takes place between Wednesday May 18 and Thursday May 19.

He said it with such conviction.

5:07 pm
Jon: Have either of you seen a trigger?
Matt: A what?
Jon: Looks like a joystick, about the size of a Pez dispenser…
Joe: A trigger? What the fuck?
Jon: Have you seen one?
Joe: Nigga please.
Jon: What about you?
Matt: Nope.
Jon: [sigh] Fuck!
Matt: What's the matter?
Jon: Robert.
Matt: What about him?
Jon: There's a bomb in his ribcage.

5:15 pm
Jon: Sorry. I thought the ribcage extended lower. What I meant to say was "there's a bomb in his abdomen."
[pause]
Jon: Kinda ruined the joke, didn't I?

5:20 pm
Nate: Hello?
Jon: Nate, I made a boo-boo.
Nate: What happened?
Jon: I planted an 11-38 in Robert's A-B last night and I've lost the trigger.
Nate: Jesus. An 11-38? Was that really necessary?
Jon: I need to make sure he doesn't talk to Pete.
Nate: Man, you're paranoid. Sure you didn't leave the trigger at home or something?
Jon: Yes! I inventoried my pockets carefully before I left this morning.
Nate: The hell did you plan to do?
Jon: Disembowel Robert during his commute back from E3. The ensuing crash would ensure his death.
Nate: Pete would be mighty suspicious if one of his men magically became a torso and legs in the middle of traffic.
Jon: Let him be suspicious. I left no scar, and labs will never trace the alloy.
Nate: Jon… Have you thought about seeing a shrink? My girlfriend kno—
Jon: What else besides a trigger can detonate an 11-38?
Nate: [sigh] Punch to the stomach or a flat fall, obviously. Hmmm. Sex?
Jon: Sex?
Nate: If it's rough enough.
Jon: Right… All right. I'll figure out a solution.

5:40 pm
Matt: Hey, uh, how did you get a bomb inside his body without leaving a scar?
Jon: Miniature explosive. Injected it through his belly button. Check.
Matt: You're sick, you know that? I raise two.
Jon: Says the open-lobed freak who spends all his free time browsing BMEzine.
Joe: I call and raise you two more packets of Splenda.
Jon: Keep flapping your mouth and I'll put a bomb in you too. I fold.
Matt: Go ahead. I'll enjoy showing detectives the scar on my OUTIE. Call.
Jon: What makes you think I'll put it in your gut?
Matt: Nothing.
Joe: Two pair beats your non-hand.
Jon: Notice how I said "gut."

6:20 pm
Elementary-School-Age Boy: Excuse me. Would y'all like to buy this bong for $17?
Matt: No thanks.
Boy: Otay.
[boy returns to patio as his mother lollers]
Joe: Some parent she is…
Jon: Word.
Joe: Shut the fuck up, Jon. God, you love the attention…

8:15 pm :: outside cinerama dome
Jon: Is this where I pick up my tickets?
Shing: Hey. Nice crown.
Jon: Heh. Sadly, this is all I own. As a staunch completionist, I can neither afford nor convince myself to hunt down the toys. Too many of 'em.
Shing: One guy in "the line" ran out of a Burger King with the display case housing all 31 toys. He offered the lady behind the counter $50 and she told him to hurry before her manager returned. Haha. 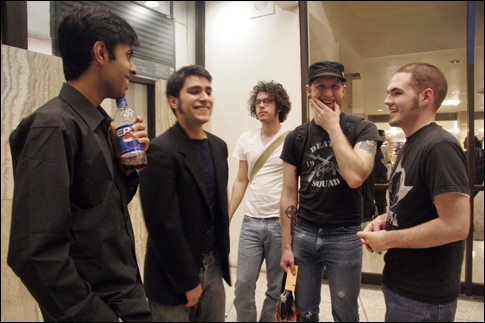 10:30 pm
Jon: Hello?
Young Republican Mark: Yo, it's Mark.
Jon: What's up?
Mark: We're nearing Vine.
Jon: Okay. In what direction are you driving?
Mark: Um…
Jon: Do you see a lot of people and news vans ahead to your left?
[pause]
Jon: Hello?
Mark: [to people in car] Do you see news vans?
Jon: Look for the only active area in the vicinity.
[pause]
Mark: Yeah, I see what you're describing.
Jon: That's the theatre. At the light after Vine, turn left.
Mark: We just passed Vine.
Jon: Okay. At the next light, turn left.
Mark: What?
Jon: Turn left on Ivar.
Mark: Ivar…
[pause]
Mark: I see Ivar!
Jon: Turn left and you'll see a parking structure on your left.
Mark: [to people in car] He said turn left, dude!
[pause]
Mark: [to people in car] Is that a parking structure?
[pause]
Jon: Hello?
Mark: Yeah, we good.

11:45 pm :: inside cinerama dome
Jon: Ahoy.
Doug: Hey.
Jon: I apologize for neglecting you two tonight. I'm trying to rotate time with each faction of our little clusterfuck.
Elizabeth: No worries.
Jon: How's life in here?
Elizabeth: Um… Your friend from Michigan keeps pretending to throw up. Quite audibly, I might add.
Jon: Which one?
Doug: The Jew.
Jon: Say no more.

11:59 pm
Jon: [checks watch] I'll be back.
Elizabeth: Where are you going? The movie's about to start.
Jon: Marky Mark and the Funky Bunch are M.I.A. [sigh] Just my luck…