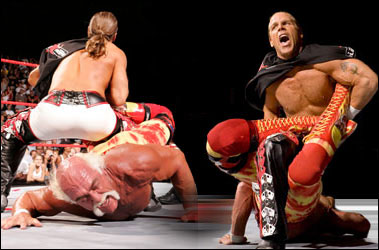 Damn you, WWE, for teasing the return of Bret Hart (in Montreal, no less).

You want Bret? You're not gonna get Bret because I screwed Bret. I did it once and I'd do it again. If Bret "The Hitman" Hart had any guts, he'd walk down that aisle tonight, step into this ring…

I nearly peed myself when his entrance music began playing.

I should know better than to expect Bret Hart to appear at SummerSlam (or on television at all), but he'll be in Charlotte, NC on Sunday for a wrestling fanfest until 6:00 pm, and Charlotte's not that far away from Washington D.C., where he wouldn't be needed until 10:00 pm at the earliest.

How about that Canadian audience chanting "your pussy stinks" at Lita in French?

Oh and what ever happened to Ross Rebagliati?