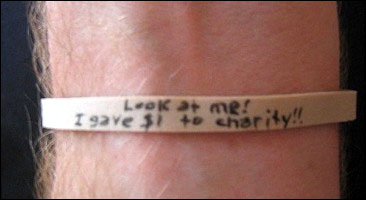 2. I tried writing a sketch about Domino Harvey at Bounty Hunters Anonymous

but couldn't sustain the premise.

The plan was to populate the BHA meeting with other notable bounty hunters — Boba Fett, Dog, Brisco County Jr.

It sounded better in my head than in Notepad.

"Cusack used to be a White Sox fan," Reinsdorf said, recalling Cusack coming to the Sox 2000 playoffs. "He showed his true colors. Now that we won, someone on his behalf called my office. I wouldn't give them to him."

"…unless he gave me a pound of his flesh!"

How ironic it would be if he denied Joan Cusack access to U.S. Cellular Field.

6. Jord asked me if I thought recycling actually works.

"Am I certain that what I recycle will be recycled? No. To let that dissuade me from recycling, however, is absurd," I replied.

He responded with a condescending "Yeah, yeah…"

Excuuuse me for being concerned about Earth's dwindling landfill capacity.