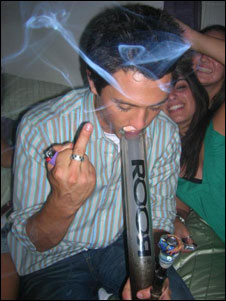 To me, bad television is unavoidable. Boring television, however, is unacceptable.

In little over two years, the show has devolved into an endless series of love triangles.

The love triangle is The O.C.'s "Marge kicks Homer out of the house."

When primary television characters fall in love, they stay in love. They get married, they have children.

When they separate, they inevitably reconcile. See: Ross and Rachel, Carrie and Mr. Big, Tony and Carmela, Tony and Michelle.

Therein lies the problem with The O.C.

While watching characters fall in love is entertaining, watching them in love is not. This is why Hollywood rarely produces sequels to romantic comedies.

Whatever happens, Ryan with Marissa and Seth with Summer are foregone conclusions, unless one of two events happens:

1. Death
2. Departure (although writing characters off is not always a sure bet, as evidenced by the reunion of Dr. Ross and Nurse Hathaway on E.R.)

Will The O.C. ever dare downsize its Fantastic Four (Six, counting Sandy and Kirsten)? Doubtful. Should it? As soon as possible.

Anything is better than the painful tedium of pointless tumult.

Yes, even Mischa Barton as a grieving pre-widow.