I haven't exploded in anger since the spring of 2000 (publicly berated a cast member of the school musical — she quit the next day), but boy did I want to stab Chad and Jord in their carotids this past weekend.

I shit you not. I seriously considered gilling them with a serrated knife.

Jon Yu? Capable of violence? Indeed. Ask my brother about the time I threw a screwdriver at his left eye and missed by two centimeters. He refuses to let me forget.

I'm not proud of my inner Hulk — who would be? — but prolonged exposure to moronic behavior can compel even the Dalai Lama to snap.

"Listening to The Forecast and Action Action, man, is like rinsing your ear canals in manna."

In fairness to Chord Joad, I put myself in a position where my breaking point came within reach. 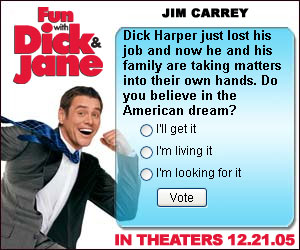 Do you believe in what? It's a comedy, not The Great Gatsby!

Also: How can you poll people on such a weighty subject beside that ridiculous photo of Jim Carrey? 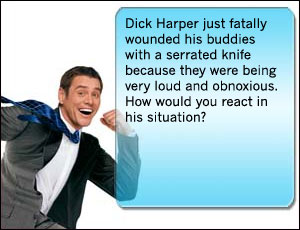