In development at Spike TV:

"Big Iron," in which regular guys get the chance to operate heavy machinery.

"'Passions' dramatic blend of magic, romance, the supernatural and fantasy makes it an ideal choice for Sci Fi's morning line up."

Considering most of Sci Fi's programming, a soap opera isn't much of a stretch.

The only "Passions" footage I've ever seen was during a commercial for some "Passions" natural disaster event.

No one told me there was magic and fantasy! Shit… What have I been missing?

Robot:
passions is fucked up
there was a monkey
and like a creepy midget man/kid
a really fucked up soap opera
sounds like trapped in the closet
they're similar

Premiering in March on FX:

"Black, White"
A six-part documentary series about two families — the Sparkses, a black family from Atlanta, and the Wurgels, a Caucasian family from Santa Monica, California — who share a home in Tarzana, California, during which Oscar-nominated makeup effects artist Keith VanderLaan makes the Sparks family appear white and the Wurgels appear black. 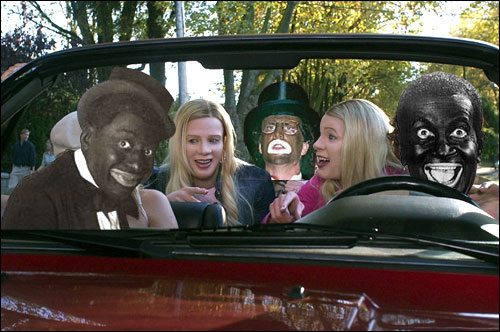