This photograph appeared on the front page of today's paper: 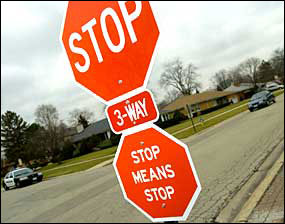 "The guys from Infinity [now CBS Radio] came to us and said, 'We've got Jack stations and you've got Jack Bauer, doesn't it make sense to do something together?'"

Hell, this show is so hot even Peter Weller left his professor's gig at Syracuse University long enough to appear as Henderson, the fed who got Jack the gig in the first place long, long ago.

Whoa. RoboCop is a professor at Syracuse.

IMDb: "He teaches a literature and fine arts class."

GookBox forum:
"What if it was unintentionally called niggerbox? Should we say anything?"

I'd say "niggersphere" rolls off the tongue better.

The poster for Eight Below makes me laugh every time.

That image of Paul Walker is amusing on its own, but then they surround him with sled dogs and hyperbole.

Among viewers 12-17, "Meet the Barkers" was the most-watched program in primetime last Tuesday, beating out all other broadcast and cable programming.

The future of America, ladies and gentlemen.

How anyone finds Travis Barker's life remotely interesting is beyond me.

Maybe if he still drummed for The Aquabats I'd watch…