Previously on Adam Riff™: "Hey, Cunta Kinte, slavery was abolished! Act like a human being and store your waste in your little knockoff purse until you're near a fuckin' garbage can!"

Today, I saw another young black girl litter in a subway tunnel. She wore a puffy black jacket very similar to the original perpetrator's.

Public libraries in Chicago just recently stopped using due date cards. I shouldn't compare Santa Clara County to Chicago, but by 2000, all our public libraries had automated checkout machines.

The Chinatown branch of the Chicago Public Library subscribes to SmackDown! magazine. 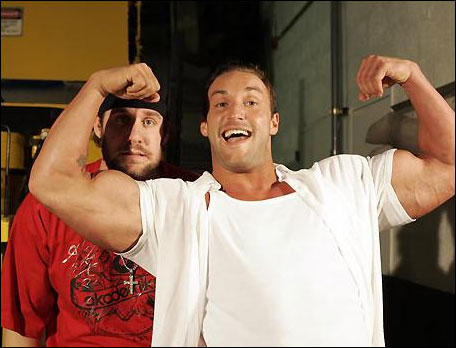 Da 'berger and the Masterpiece

Conversations I've had during a normal day in Los Angeles, modified to include the shocking depiction of racism found in Paul Haggis's 2004 [sic] film Crash

Terrence Howard will not be singing the Oscar-nominated "It's Hard Out Here for a Pimp" at the 78th Academy Awards.

Instead, he believes it will be performed by the Memphis-based trio Three 6 Mafia.

Or, you know, Beyoncé could do it.

This should be interesting / challenge Björk for Oscar® music infamy.

Asterisked additions to the Neighborhood Watch: