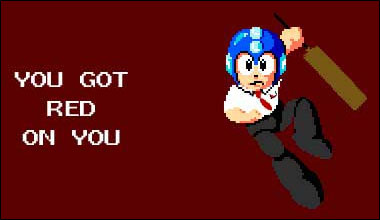 Megaman Gets Equipped
"This week the Something Awful Forum Goons decided to give Megaman a few abilities and traits not depicted in any of the games."

Megaman vs. Metroid
"My first flash game […] Someone suggested I mix the two games."

Putting Wilmer on Blast
"To prove that Wilmer [Valderrama] is a monster douche, we've created a photo comparison chart."

Songs About The Office
"On March 31, 2006, I realized that my true calling was to write songs about each episode of The Office."

The Bathroom Incident(s)
"If you've seen The Squid and the Whale you'll understand where my fear is coming from."