I want Yao Ming, the basketball player, to be in it. I want to recreate the fight sequence from the Bruce Lee movie where he fights Kareem Abdul-Jabbar, but I want to do the reverse; I want Chris Tucker to fight Yao Ming. [source]

He just assumes the Chinese guy can fight.

I just learned about the "hamdog" today.

It's a half-pound of hamburger meat wrapped around a hot dog, which is deep-fried and served on a hoagie topped with chili, bacon, cheese, onions and a fried egg. 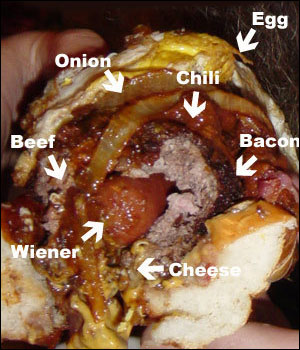 While searching for an image of a "hamdog," I stumbled upon this.