Elaine Benes once said, "It'll be years before they find another place to hide cheese on pizza." Well, it did take years, but the Japanese finally figured it out: under the bacon, which is under the sausage, which is in the crust. 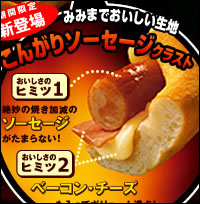 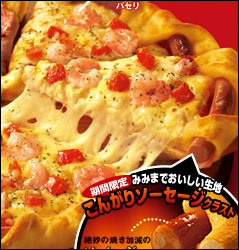 Here, sausage encircles a Shrimp and Egg Land pizza. As if the combination of shrimp, egg, sausage, bacon and cheese isn't enticing enough, the pie is slathered in mayonnaise.

I attended an in-bookstore appearance by Anthony Bourdain, chef, food writer and host of No Reservations, arguably the best non-fiction program on television.

I'm always amazed at the inanity public Q&As attract. I could never be as tolerant as the interviewees I've seen live.

You have the attention of someone you admire and that's what you ask?

Another man told Bourdain that he home-brews sausage and that the prevalence of processed sausage dismays him.

"How can we re-educate people about sausage?"