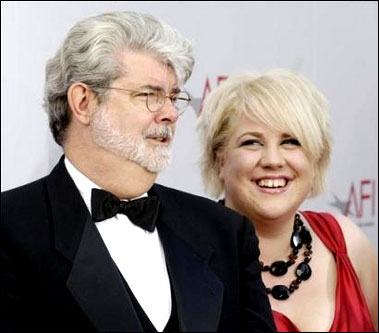 Lucas sure adopted one fugly daughter.

His facial hair looks so weird with his undefined chin and goiter neck.
I can't help but think:

On the way to Home Depot today, I saw a man with a comb-over rockin' out to When in Rome in his gold station wagon.

At Home Depot, a used brick costs 11 cents more than a new brick. Someone explain that pricing logic to me. Vintage bricks?

While waiting for my lunch at Taco Bell, I overheard a man tell his baby daughter, "It's your first time at Taco Bell!"

The flavors start out reasonable enough. There's "cheesy" and there's "spicy", and then… "crunchy"? I'm not sure about cru- what? Melty? That's right, they said that melty is a fucking flavor. I don't think that melty is technically even a word. Who has ever been eating some ice cream and offered up that it tastes melty? Maybe retarded people, in which case, it seems that Taco Bell has been confusing its target demographic with its employees again.

"Hey, you know that time between dinner and breakfast when you crave melty, crunchy, spicy and grilled tastes?"

Okay, only one of those four tastes is actually a taste.

"Grilled" is not a taste; it's the past tense of a cooking method. What Taco Bell needs is an adjective that describes the taste of grilled food.

Assuming "grilled" is a taste, however, I've never discerned such a taste in Taco Bell food.