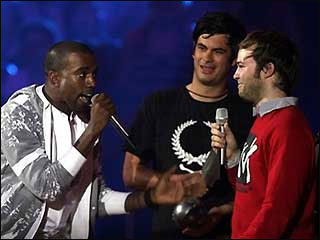 "Fuck this! [My video] cost a million dollars. Pamela Anderson was in it. I was jumping across canyons and shit! If I don't win, the awards show loses credibility."

At the MTV Europe Music Awards, Kanye West was so disappointed at not winning for Best Video that he crashed the stage when the award was being presented to Justice and Simian for "We Are Your Friends."

I haven't seen [the winning video]. Possibly it could have been quite good, but no way better than "Touch the Sky." That is complete bullshit. I paid a million. It took a month to film; I stood on a mountain; I flew a helicopter over Vegas. I did it to be the king of all videos and I wanted to walk home with that award."

He stood on a mountain!

Pamela Anderson was in it!