I saw a Mervyn's commercial that used a parody of "My Sharona" with the chorus "M-M-M-Myyy Mervyn's."

Another winner from the world of marketing…

If you're gonna parody a song, at least preserve the same number of syllables.

Or choose words that you can reasonably split into the same number of syllables.

I "work" across the street from Oracle. Sometimes we eat lunch at Larry Ellison's cafeterias.

Today, while waiting for a Cajun burger, an Indian man approached the grill to order.

I'm not sure how wrapping a taco in a tortilla (with melted cheese as "glue") enhances its flavor. Seems redundant more than anything, like sandwiching a burger between two buns.

Taco Bell should call it what it is — a taco quesadilla or stuffed crust taco. 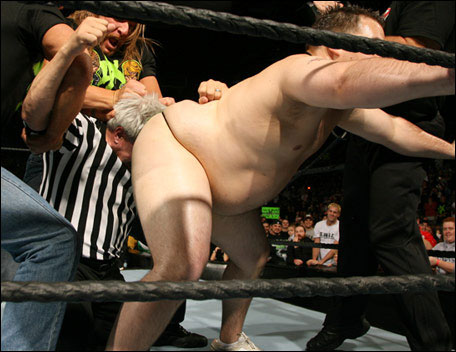 The WWE is going to be doing its own cartoon on its web site called "Mr. McMahon's Ass."