Date: Sun, 04 Feb 2007
From: "Leon"
Subject: Hey, I won't be able to make it on Monday(tommorow)
Hey, All! I just wanted to let you people know, that I will not be able to show up tomorrow on Monday! Family emergency.

P.S. I am using my parents computer.

Hell, everyone! I have been going through some struggle. Life was getting hard this weekened. I was able to work a little on my part. However, I am working on it now and going to work in the morning and tuesday. I am going to do what I can. Hope you understand. I need some help. I am having problems, getting a better book. Well, hope to speak to you guys later.

Hello, Guys! I have some bad news. I will be dropping the class, because I have been bleeding badly. Spitting out blood and just nose bleeding. It has been going on for about 5 days now. It's getting worse, and so, I cannot concentrate right now. I am sorry guys.

Crunch time rolls around and he suddenly becomes a hemophiliac.

I was Leon's partner in TWRT 63 and he similarly dropped the class two-thirds of the way through the quarter, citing overwhelmingness.

The "W"s on his transcript must rival those of the '72 Dolphins.

I've never met anyone so incapable of producing anything worthwhile. At our final meeting before a rough draft deadline, Leon shared what appeared to be an outline printed in red ink.

No, you're twenty-fuckin'-one years old! What you need is someone to carry your indolent ass! 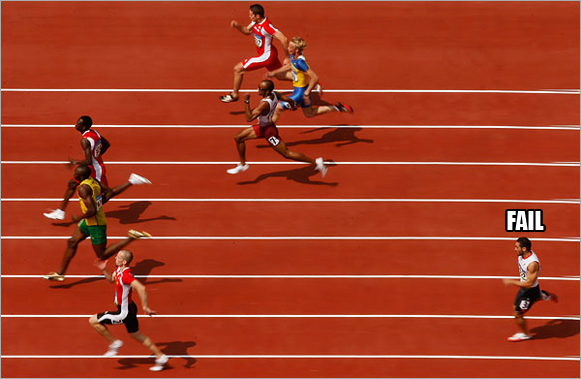 Seven Genres We Could All Do Without [Cinematical]
I'd include "fat suit comedies."