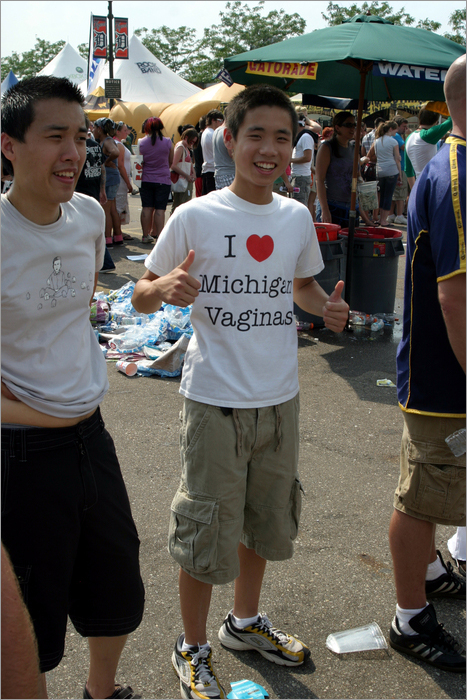 I wonder if he bought the shirt or designed it himself. Either way…

Apparently [Tony] Jaa walked off the set [of Ong Bak 2] two months ago, stressed over the work load of his directorial debut.

Some reports say that Jaa has retreated to some remote caves in northern Thailand to meditate and / or practice black magic.

Another report from Thailand's biggest daily paper says that they had a reporter meet with Jaa at a 'safe house' where he [claimed] Sahamongkol Films only ever provided him with half of the budgeted production funds, leaving him to make up the shortfall out of his own pocket and claiming that he is now personally bankrupt as a result – unable to pay his mortgage and with his electricity disconnected. [source]

Someone document this shit with cameras! It's like a Thai Hearts of Darkness!

Okay, next time just inform me when I need my seat upright and tray table locked. Fuckin' teases…

I prefer to sit in the backs of planes because I feel like if a plane crashes, the people in the front die first and I could maybe survive.

I also wear socks with sandals.

Has anyone ever re-considered sitting beside an emergency exit door?

"I'm not sure I can open this. [to the cabin] Hey, does anyone want extra leg room?"

T-Pain should cover "Blue" by Eiffel 65.

On December 2, 2000, the Smashing Pumpkins played a farewell concert at the Metro, the same Chicago club where their career effectively began 12 years earlier. The four-hour-long show featured 35 songs spanning the group's career, and attendees received a recording of the band's first concert at the Metro — Live at Cabaret Metro 10-5-88.

This fall, the Pumpkins will celebrate their 20th anniversary with a handful of shows that will focus on the band's history, legacy and accomplishments over their career.

Their planned Gish tour, coinciding with a re-issue of their debut album, has been pushed back to 2009.

The Smashing Pumpkins are rock Disneyland.

WWE has hired Freddie Prinze, Jr. as a member of its creative team. [source]

I know what you did when Hollywood stopped calling!

DID YOU KNOW? We have no clue what the fuck we're doing. (inside joke!)

Orton is, of course, most famous for unscriptedly pooping in a WWE diva's gym bag.

Red Mango offers watermelon as a topping. For frozen yogurt.

Whole Foods should hold a contest where the winner can go on an eating spree in his or her local Market's hot food section. Every time I visit, I just want to try everything.