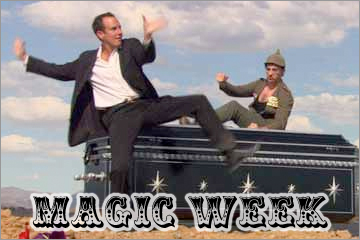 A long time ago, Penn and Teller rung in a new year on Fox by failing to escape from a champagne torture tank.

Penn sang "Auld Lang Syne" with observers and then the two were shackled and sealed in the tank.

Cameras caught Teller extracting a key from his mouth, which he subsequently dropped and struggled to retrieve.

Eventually, an emergency crew intervened, smashing a hole in the tank with a sledgehammer to drain the champagne before carting both men off in an ambulance.

To this day, I wonder if Penn and Teller actually or intentionally botched the escape. They're capable of either scenario.