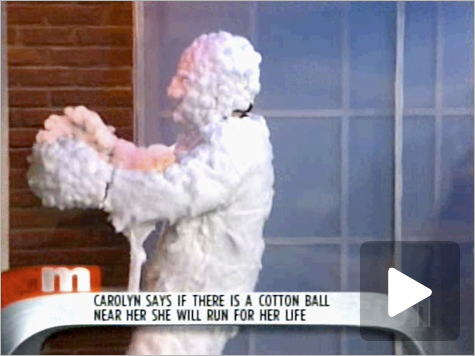 » I pray the cause of my death is not a car bomb. What a shitty way to die, and a cheap way to kill someone.

» I just noticed the spacecraft in the upper left corner of Texas license plates.

In it, filmmaker Michael Malone and his organization MoveAlong.org are trying to repeal the Fourth of July when three angels — the Angel of Death, George S. Patton, and George Washington — come to him and convince him to change his ways.

A rotund comedian named Rosie O'Connell makes an appearance on The O'Reilly Factor to promote her documentary, The Truth About Radical Christians. O'Reilly shows a clip, which opens with a pair of priests walking through an airport—as seen from pre-hijacking surveillance video—before boarding the airplane. Once onboard, they storm the cockpit using crucifixes as their weapon of choice. Next the documentary looks at the growing phenomenon of nuns as suicide bombers, seeking 72 virgins in heaven. A dramatization shows two nuns, strapped with explosives, board a bus to the cries of the other passengers. "Oh, no! Not the Christians!" O'Connell's work ends with a warning about new threats and the particular menace of the "Episcopal suppository bomber." [source]

Washington takes Malone to St. Paul's Cathedral to lecture him on freedom of religion and "freedom of speech, which you abuse." Malone is grossed out by dust in the priest's box, so the doors open onto the smoldering ruins of the World Trade Center. "This is the dust of 3000 innocent human beings!" bellows Washington. Malone whimpers that he's just making movies. Washington won't have it. "Is that what you plan to say on Judgment Day?" [source]

Surely self-respecting conservatives would rather see Eagle Eye or Choke on October 3.

It opens against Beverly Hills Chihuahua.

» I can't picture a scenario in which I'd need to shower on an airplane. I've never spent $14,000 on a plane ticket though.

» The giant inflatable dog turd would pair well with Coco the Colossal Colon.

He once demanded a horse be delivered to his room, and on another occasion ordered up a herd of sheep. Upon their arrival (yes, the hotel was that accommodating), Dalí shot at the little lambs with a gun containing blanks.

Mariah wants two DVD players in her suite—which, of course, should be set to play nothing other than her own music videos.

During his stay at London's Jumeirah Hotel, Michael Jackson requested bowls full of Haribo gummy candies, a large mirror, and a giant xylophone.

» If you've ever tried to amuse someone with the phrase "electric boogaloo," please stop visiting this web site.

We [also] got a lot of actors we know to come in and be weed test subjects in the 50s. [source]

Do they know John Cho or Kal Penn?

• Michael Cera night-lite
• You Found my Money!
• oh holy fuck. someone did it.