At lunch today, I caught a viewer comment on CNN's ticker that read: "I don't want a socialist in the White House." 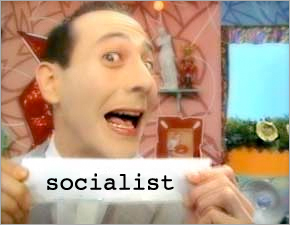 McCain must be pretty contemptuous of his supporters to play the "socialist" card.

How can you call Obama a "socialist" derisively when your party, your President and your Presidential candidate all just helped nationalize our banking system?

How can "real Americans" call Obama a "socialist" derisively when "their" farmers regularly request government bailouts?

I saw an image of a man wearing a jacket that read "change" on the back with a hammer and sickle as the "g." 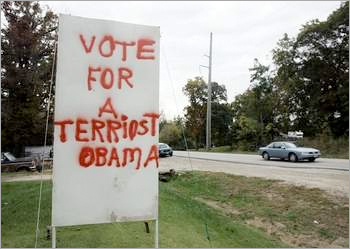 After suffering crushing, back-to-back Ls to W and with the edge in this election, the Democrats would be astoundingly foolish to field a TERRORIST as their candidate.

David Horowitz was a Marxist in his youth. Thus, conservatives are Marxists. Guilt by association, right?

A few "Yes on 8" lawn signs recently popped up in front of houses on my running route. I ran past one such house today and impulsively greeted the woman gardening outside with: "Hey, faggot!"

Why must marriage be protected?

Marriage, like socialism, is bullshit. Man invented the concept of marriage. It has no sanctity to preserve. My jerk-off fantasies are as holy as Rob's marriage.

If only religious organizations poured the same time, money and effort into championing more constructive causes…

"We want to indoctrinate them ourselves!"

Spill his blood! Bash him in! 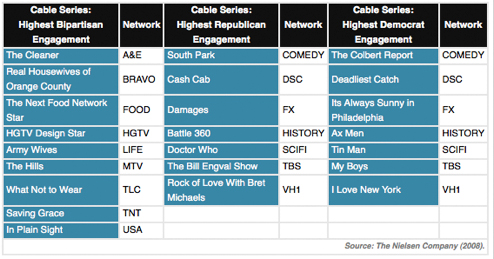 • Typocalypse: subliminal messages fonts are feeding you…
• Cartoon-Off: XKCD
• World of Warcraft vs. My Girlfriend