Gilbert Arenas had the words "Change We Believe In" tattooed onto the fingers of his left hand in cursive writing.

The inside of his left shocker now reads "we in."

According to a "media measurement service" I stumbled upon, Adam Riff™'s key demo is underage Hispanic mothers.

I saw a poster for a Latinos-like-Christmas-too film and tried to picture an Asian one.

It would be like a 90-minute ad for Las Vegas.

January opens with The Unborn and closes with The Uninvited, two horror flicks about girls with chimerical siblings, one who wants to live and one who died. 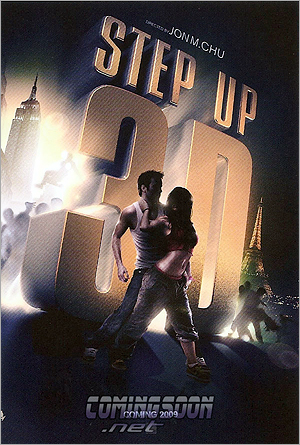 Who did Jon Chu blow to get his name featured so prominently?

If Captain EO is any indication, Step Up 3D will [insert your opinion of Captain EO].

• Creative Food Manipulation
• Production is nearing completion on "Not Another Not Another Movie"
• Urban Dictionary: palin