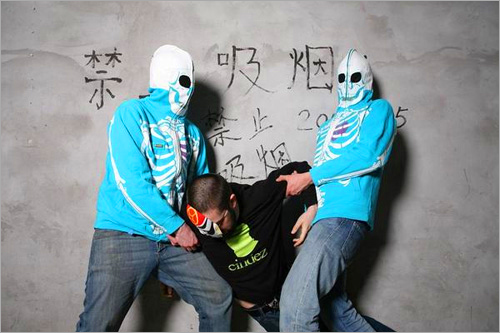 "We are the only broadcaster without yellow time-out dashes!"

"I told you! They don't fit our scorebar design!"

"Just tack them on like CBS did! All that matters is that we have yellow dashes too!"

"Also: I don't think down and distance are evident enough to viewers. Can you figure out a third way to display that information on screen?"

WWE seemingly re-modeled John Cena after Tim Tebow. Cena's latest merchandise is coloured Florida orange and blue, and last Monday on Raw, he cut a "Tebow promise" promo, apologizing to his fans for letting them down and vowing not to lose another match until he is WWE champion again.

To promote WrestleMania 26, Cena will toss the coin at the Fiesta Bowl.

I've already wasted 22 lives trying to get a stupid star coin in World 2-1.

At Chipotle, the woman in front of me ordered a bowl with the following strata:

"Cuties everywhere."
"Yup."
"The produce buyer must have overestimated the appeal of clementines."
"Wayyy overestimated."

• The Oldest TV Police Trick in the Book: Enhance!
I prefer the sharp-eyed detective. "Stop! Rewind! There!"

• Star Wars Weather Forecast
It's like Endor out here.

• How To Feed A White Man
"You cannot feed a white man sweet potatoes and expect him to act normal."