Another NFL playoff weekend was filled of ho-hum games. My initial thought was that history will prove the best matchup took place in L.A. 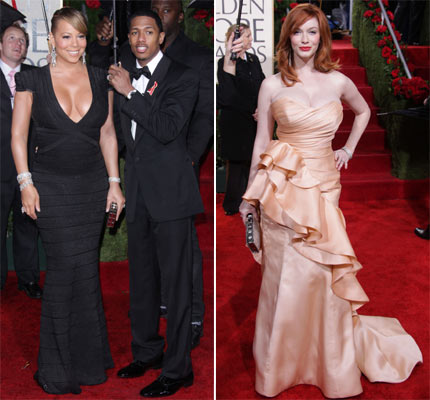 However, upon further review we discover that Boob-Off 2010 was more of a blowout than Cowboys/Vikings. Mariah Carey's are akin to the team that had a nice season, but once they faced a real opponent it was clear they were outclassed. On the flip side, Christina Hendricks… sheesh. She's more like a caricature of a human than an actual human. Hyperbole barely covers how barely covered she is.

Every time she goes out in public, 4 more college freshman become advertising majors.

Watching Conan's last few shows is like hanging out with a friend who's on death row but is freed as his sentence date quickly approaches. I watch it and think to myself, "If I'm to die in my mid-70s (how about it, God?), I wouldn't want to know now, but I would like to know one month prior." One of the rare advantages of being on death row.

Will Ferrell sang "Never Can Say Goodbye" on Conan's first Tonight Show. Will Ferrell is a soothsayer. On Friday, if pattern holds, smart money says he'll sing Tina Turner's "The Best" or Joe Esposito's "You're the Best". Or 311's "I'll Be Here Awhile". Heh.