Ed. Note: Reader Matthew asked if he could guest blog and I obliged.

If you're from Pittsburgh and it's April, you know two things are about to the happen: 1. The Pirates bullpen is about to send us to the basement of the league again and 2. Penguins playoff hockey is about to begin.

I know about 80% of the country is thinking "Pshh! Who cares about hockey?," but give the playoffs a try. If you thought the USA vs. Canada gold medal game was intense, just imagine the intensity of a best-of-7 series. Overtime games feel like watching that scene in Boogie Nights where they try and sell the fake cocaine and the guy in the corner is setting off fireworks. Every turnover, every shot, takes about 20 years off of your life.

#1 Washington Capitals vs. #8 Montréal Canadiens
Caps are the Presidents' Trophy winners this year for finishing the regular season with the most points. They also have some player named Alexander Ovechkin, whose wrist shot has a chance of ripping a goalie's glove hand clean off. Montréal's hope lies in Jaroslav Halak, who was the goaltender for 4th place finisher Slovakia at the Olympics. Halak will need to have the series of his life if the Canadiens hope to shock the red of Washington.

Ovechkin on Halak: I must break you.

Random Thought: It would have been great if the prisoners in Riki-Oh: The Story of Ricky had to play a hockey game.

#2 New Jersey Devils vs. #7 Philadelphia Flyers
NJ will depend on future Hall of Famer Martin Brodeur, while Philly will depend on Brian Boucher, who helped the Flyers make the playoffs. 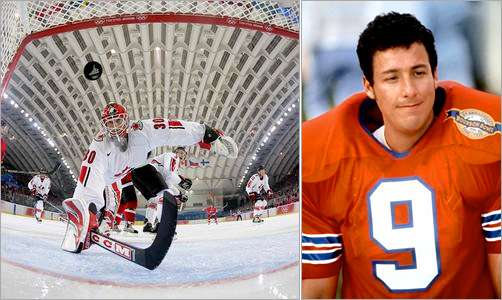 The two goalies faced each other in 2000, where they took the series to seven games. For Philly to have a chance, Brodeur will need to repeat his past, screwing up when it really matters (a.k.a. the USA vs. Canada round robin game).

#3 Buffalo Sabres vs. #6 Boston Bruins
This is one of three must-watch series during the opening round of the playoffs. Last year, the B's were the top seed and highest scoring team in the league. This year, they ranked near the bottom in scoring and limped their way into the playoffs. Sabres are my wildcard pick to make it to the finals, but it will all depend on the man who almost carried Team USA to the gold – Ryan Miller.

You better get mad, kid: Ryan Miller went into the Olympics not looking so hot, but somehow rose to the occasion. If he has the same attitude in the playoffs, it's going to be MILLER TIME.

#4 Pittsburgh Penguins vs. #5 Ottawa Senators
Out of four games, they split two apiece. Scores ranged from 4-1 to 8-2. So each game is either going to be a blowout or 2-1. I think this is a good opening round matchup for the Pens, but I also thought we would walk through the Islanders in 1993, and that didn't turn out too great. Don't take the Senators lightly. They know they're facing the defending champs and they'd love the bragging rights of knocking them out of the playoffs.

#1 San Jose Sharks vs. #8 Colorado Avalanche
Sharks are once again the best in the west, while the Avalanche are a young team looking to make up for dwelling in the basement the past few seasons. Sharks have the scoring, but bad penalties and Nabokov's goaltending could be their downfall.

No really, it was just a boating accident: The Sharks have been the best team in the west before, only to slowly collapse during the playoffs.

#2 Chicago Blackhawks vs. #7 Nashville Predators
Chicago has everything – scoring, defense – and once again, Marian Hossa finds himself playing for a Stanley Cup contender. 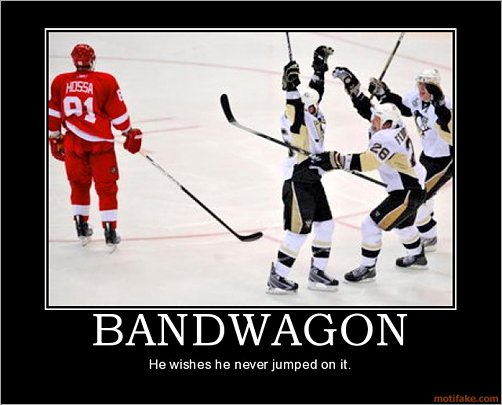 I really want to like the Predators, but I just don't see them knocking Chicago out. They once took the Red Wings to seven games, though, so this series could be interesting.

#3 Vancouver Canucks vs. #6 Los Angeles Kings
The second must-watch series of the playoffs. The atmosphere in Vancouver during the Olympic hockey games was electric, but during the playoffs, it's going to be insane. Yeah, a gold medal is great, but these people want The Cup. Will Roberto LUUUongo be clutch like he was for Team Canada?

You come at the king, you best not miss: The Kings are very dangerous team, especially since they have this defenseman Rob Scuderi, who was a hero for the Pens during the 2009 playoffs. You may remember him from this play:

#4 Phoenix Coyotes vs. #5 Detroit Red Wings
Series number three on your must-watch list. The Red Wings are playing some unreal hockey going into the playoffs – what else is new? The Coyotes, on the other hand, are back in the playoffs for the first time since 2002. They filed for bankruptcy earlier in the year – even Wayne Gretzky gave up on them. Maybe an Us vs. the World mentality is what they need to actually beat Hockey Town.