This past summer, The Secret Life of the American Teenager introduced an openly gay high school freshman whose two older brothers are also gay.

I tuned in for Sunday's season premiere of The Amazing Race, however, and…

My buddy introduced me to his buddies – gay Republican identical twin brothers from Tennessee.

Not sure how I feel about this official 9/11 gift shop, which sells a novelization of Man on Wire and DVD copies of United 93.

Spotted one of these in the wild.

Fully Persuaded for Children and Families is an odd name for an organization.

I think he was talking about me. 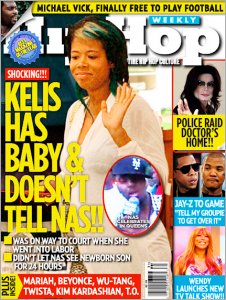 I discovered You People Hip Hop Weekly at a newsstand beside F.E.D.S. (Finally Every Dimension of the Streets). "Mannie Fresh Rips Cash Money: 'I went through close to slavery!'"

I wanted to stand on the arms of the Williamsburg Bridge and cry "Hey man, well this is Babylon," but couldn't figure out which part of a bridge constitutes the "arms."

The sight of orthodox Jews working out cracks me up.