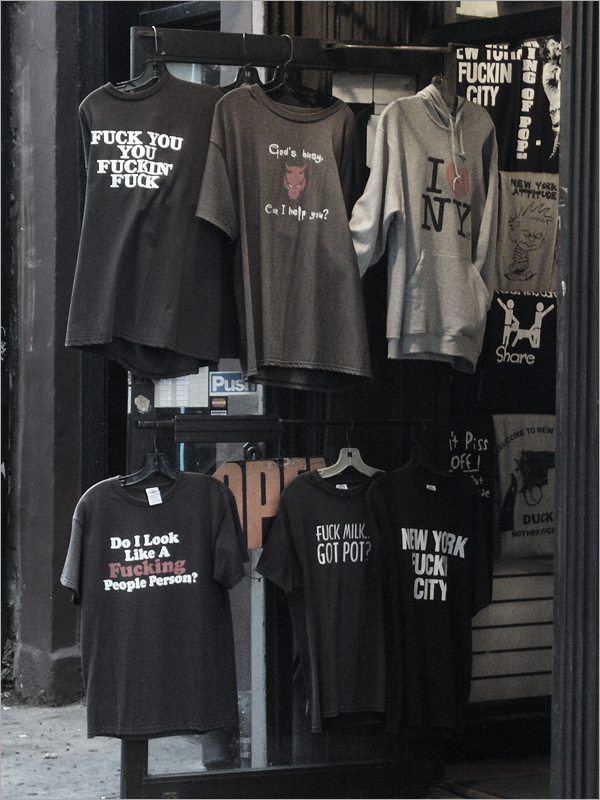 One day in eighth grade, Dave Bowman showed up to school wearing a Marilyn Manson shirt that read "I am the god of Fuck" on the back. At the time, I thought his shirt was super scandalous and snitched to Mr. Spenader, who asked Dave to cover it up.

Seeing "fuck" on clothing jarred me, like hearing characters in a video game curse.

Patrik 1,5 is a Swedish film about a gay couple who inadvertently adopt a juvenile delinquent.

On the film's official poster, you see Patrik in a shirt that he does not wear in the film. Whoever designed the poster added a message to Patrik's shirt, presumably to illustrate that Patrik is trouble.

Why that message, though?

I can think of a number of more tasteful ways to convey "trouble."

I can also think of far crasser messages to slap on his shirt. The designer(s), evidently, drew the line at "Fuck you you fucking fuck!"

The difference between saying or writing profanity and wearing profanity is that language is generally ephemeral.

• A Sampling of Chinglish
• With the Multicolr Search Lab, you can browse through 10 million Flickr images and find ones that share the same colours.
• 12 Most Amazing Dog-Shaped Cakes