[John Wooden] used to mimic Andre McCarter. Andre had this crazy warm-up routine to Miles Davis or The Weather Report or Jimi Hendrix, real spacey music. He'd go through all this stuff. One game, Coach Wooden got behind and was mimicking everything Andre was doing. We'd bust up laughing and Andre would look behind him and Coach would be back in his stance, pretending he wasn't doing anything. [source]

The trailer for The Adjustment Bureau confirms that "Sunshine (Adagio in D Minor)" is the new "Lux Æterna."

I wonder if vitaminwater intentionally set a Revive ad titled "Epic Night" to a song about regretting epic nights.

In Apple's current iPad ad, someone plays a piano with an iPad as sheet music.

I question the viability of digital sheet music. For widespread adoption to occur, I think the price of digital readers must drop below $50. Playing an orchestral instrument is not a particularly cheap activity. Add a digital reader and you risk pricing out potential musicians. Orchestras become country clubs. 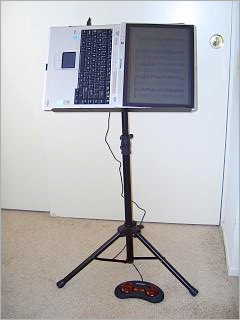 Why waste paper and ink to print out score [sic] and then turn it by hand instead of turning it directly in a computer by foot? [source]

Our core audience of 16- to 34-year-old males are much more familiar with Green Day music than The Beatles.

Once more with feeling: [pause]

I caught an MTV News report on a FreeCreditScore.com talent search at the Hollywood Palladium.

We're looking for a new band to get America singing about credit scores. You could become a new icon for your generation. [source]

I'm not sure what's sadder: That this is what MTV News has become or that people actually auditioned to "carry the torch for credit score rock."

Katy Perry recorded "California Gurls" as a response to "Empire State of Mind." Evidently, she's never heard any of the other hundreds of songs about California.

…and fuck New York too

Get Him to the Greek

• You Can Fit A Lot of Stuff Up Your Butt
• A man convinced 13- and 14-year-olds to send him pictures of their genitals by saying it was a membership condition of the clan he was starting in Call of Duty: World at War
• Photo of Andy Garcia