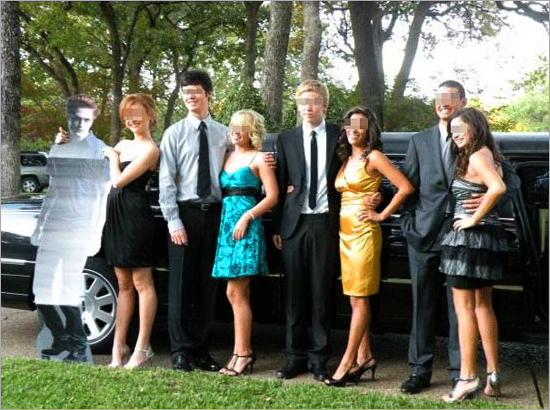 From a Time article on Eclipse attempting to reach out to male audiences:

Still, when it comes to convincing bro nation, Summit has an uphill battle ahead. Adam Carolla, a former co-host of Comedy Central's The Man Show, whose testosterone-filled podcast is now the most popular on iTunes, finds Eclipse a hard sell. "How would I market Eclipse to guys? I'd tape a hundred-dollar bill to the bottom of each theater seat," he tells TIME.

I'd love to hear the phone call.

In 2008, Disney surprised Comic-Con attendees with a teaser for what would become Tron: Legacy. I wish more Comic-Con panels featured E3-press-conference-type surprises. If Disney can secretly produce a teaser, so can every other studio.

All that box office futures trading would to [sic] is make it so that ticket prices become so unreasonable that a family of 4 just couldn't afford a night out at the movies with snacks on a regular basis… Oh wait..

Even if your family cannot attend matinee screenings, you can eat beforehand, or smuggle in snacks, and opt against premium screenings in 3D and Fake IMAX. You can also buy discounted passes at Costco.

• My "one strike" rule for Twitter/Flickr and why you shouldn't be offended when someone blocks you.
• PETA asks Vince McMahon to bring wrestler Daniel Bryan back.