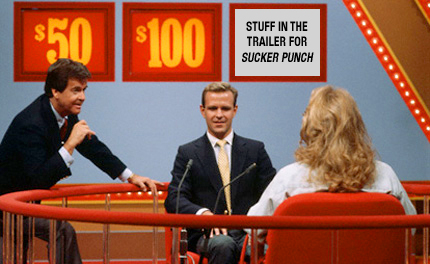 What film is this trailer for? Oh. An upward shot of a forest canopy. New Terrence Malick.

Malick's pitch to Fox: "The Assassination of Sean Penn by His Father Brad Pitt."

Darren Aronofsky's pitch to Fox: "It's about a ballerina who desperately needs to get laid."

Ty ranked it above The Wrestler among Aronofsky's oeuvre. Eh… I think the autograph show in The Wrestler alone is better than anything in Black Swan, although Swan's final act is something fierce.

—What else has Colin Firth been in?
—A lot of British films, period pieces. He's like the Takeshi Kaneshiro of the U.K.

—Oof. Not a good look for Helena Bonham Carter.

I cannot believe that Geoffrey Rush's filmography only extends back (more or less) to 1996. He's so good.

Idea: A reboot of Police Academy starring Rush as Commandant Lassard, and Zachary Levi as Mahoney. And Adam Baldwin as Tackleberry. Heck, cast the whole cast of Chuck. Warner Bros. owns both properties.

—This is the frontrunner for "Best Picture"?
—Co-frontrunner, with The Social Network.

If possible, Fox should push Rachel Portman for Best Original Song. Her score for Never Let Me Go won't win an Oscar, but her song "Never Let Me Go" can.