Jon: I'm stubbornly attached to the idea. How much do you estimate it would cost to stage? To save money, we could crowdsource housing and transportation, and bands could share instruments, leaving airfare, venues…

Jon: I wonder if we could secure funding via Kickstarter. I just seek to break even. This is a non-profit venture – pure fan service.

Jon: We lift the three song rule. All you can shoot, but no flash. 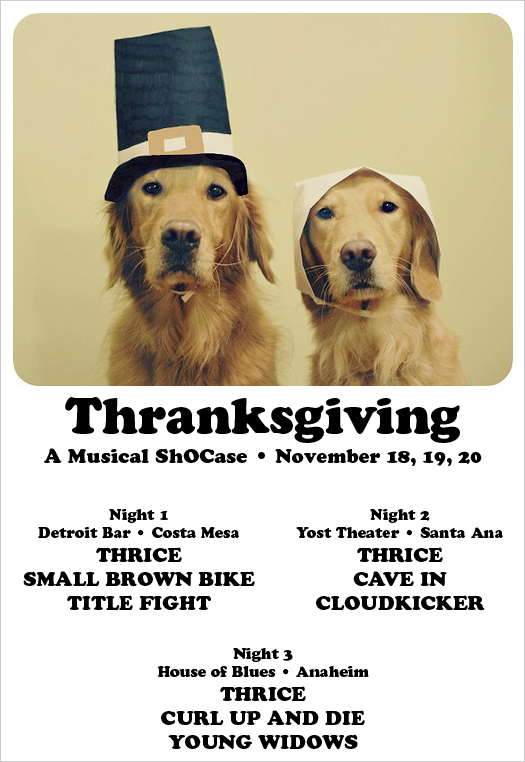 Jon: EH?
Jon: It's like a Thrice cruise on land.
Adam: I'd pay a lot of money to see that.
Jon: I think it's feasible.

Adam: How do you plan to re-unite Curl Up and Die?
Jon: Uh… Know any Marines?
Jon: Worst case scenario, it's Mike and a backing band – CUAD with Buckethead on guitar.

Matt: How about adding United Nations?
Jon: Has United Nations ever performed live?
Matt: They did in NY, NJ, and DC, but never on the west coast.
Jon: Geoff Rickly, Daryl Palumbo, and Ben Koller – re-uniting CUAD may be easier.

Matt: Ooo. Hot Water Music.
Jon: I considered HWM, but we need to reserve some acts for Thranksgiving 2.

Ryan: Thrice is still a band?!
Ryan: (loved CUAD so much…)