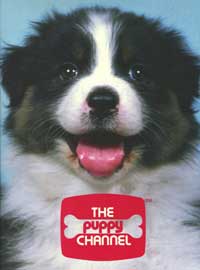 The Puppy Channel was a short-lived American cable television channel whose programming consisted entirely of video footage of puppies.

Dan FitzSimons came up with the idea when he was watching the O.J. Simpson murder case during the daytime and kept flipping through the channels during lulls in the trial only to see nothing was on but game shows, soaps, and reruns. FitzSimons thought "Something else is necessary."

41% of people in focus group surveys said they would prefer watching the channel to CNBC and 37% preferred it to TBS. [source]