Blaaaaame Canada! Savages!
Barely even human
Canada! Savages!
Seal up the border
They're not like you and me
Which means they must be evil
We must sound the drums of waaaaar

Evidently, MSNBC only has one photo of Jason Bourne on file. 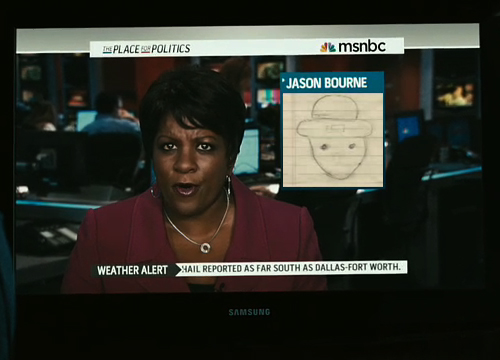 My adaptation of Savages: Cory and Shawn rescue Topanga from Miss Elizabeth and Macho Man.

Oh c'mon! Show a close-up of his dislodged eye!

I wonder if Blake Lively or Salma Hayek swallowed any of the red meat that their characters eat.

Elena is too inept a drug lord for this film to run 131 minutes.

This film should've just been an animated GIF of Benicio del Toro wiping Blake Lively's spit off his face with her hair.

What was Drew "holy crap"-ping about? If anything, the characters (on both sides) weren't savage enough. They needed to be more…Korean. As is, neither side suffers enough for me to be invested in the struggle.