Robot: Have you seen this Kreayshawn video?

Robot: Jesus. I know I'm not that old. This is just utter shit.

Jon: Eh. Every generation has its clown music.

Robot: This is a brand new level of shit. Even bad nu-metal is better than this. 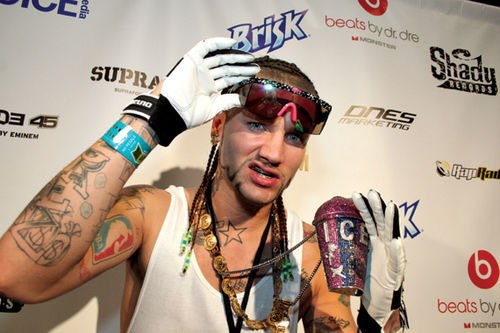 "What separates him is his sense of humor. He's like Biz Markie in his goofiness or Kool Keith in the way he puts words together," says his friend and collaborator Simon Rex.

As to why he got a BET tattoo on his breastplate, he answers matter-of-factly: "Because one day I'm going to be on 106 & Park."

His favorite TV show is Portlandia.

So Simon Rex is rapping with Riff Raff, and Tabitha Soren's photography is currently on exhibit at the Indianapolis Museum of Contemporary Art. 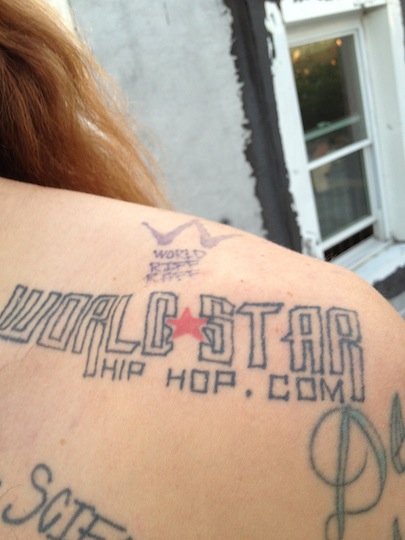 Jon: I was flipping through my car radio today and heard Green Day's "She" on an adult contemporary station.

McKern: Man, when I heard Green Day in a bank, I knew my childhood was over.

Episode titles for season 12 of Degrassi:

"Come As You Are"
"Got Your Money"
"Say It Ain't So"
"Closer to Free"
"Waterfalls"
"Rusty Cage"
"Never Ever"
"Sabotage"
"Scream"
"Building a Mystery"
"Doll Parts"
"I Want It That Way"
"Tonight, Tonight"

When was the last time you crossed paths with "Building a Mystery" or "Rusty Cage"?

Jon: Name a song from the '90s, and I'll try to conceive a Degrassi plot for it.

Jon: A foul rumour about a female student spreads out of control.

Jon: A male student comes out, and his evangelical parents send him to an ex-gay camp.

B: "The Sidewinder Sleeps Tonite."

Jon: Oof. [pause] Suicide hotline…? I got nothing.

B: We should add this to our game night rotation. Baldergrassi.